WIP Transports for Battlefleet Gothic and other things

So this is how it is coming along. I hope to get the six transport/supply ships done soon. I should have a full day of working on it this Tuesday, so I better get some sleep right after I post this.


The colors on this is pretty cool looking, I painted then washed and then went back over with the main colors once more. Once I get the lighting done and some shiny parts it will be perfect.


Here is a work in progress of the transports/supply ships, just got the Primer on, letting it sit and then finish this up probable by on monday. I will start work on the planet also, I feel like a earth type world. The stands with post are for more asteroids.

Posted by Miniature Player at 1:13 AM No comments:

Just a test piece for use in Battlefleet gothic using Babylon 5 ships. I like how they look. 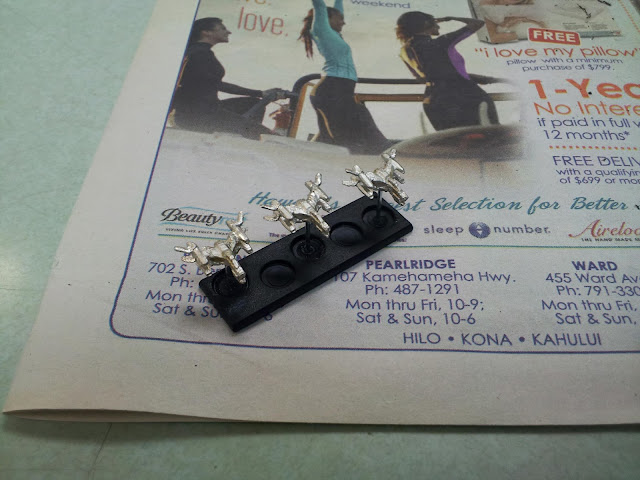 Posted by Miniature Player at 5:52 PM No comments:

I can't wait to see this Planetfall release next year!

Ok, I wasn't a fan of the Dropship Commander miniatures, but Planetfall's artwork looks good, and should prove to be some nice miniatures if they can pull it off in miniature. I hope the rules system is rock solid also and come next year I will be building my little army up. 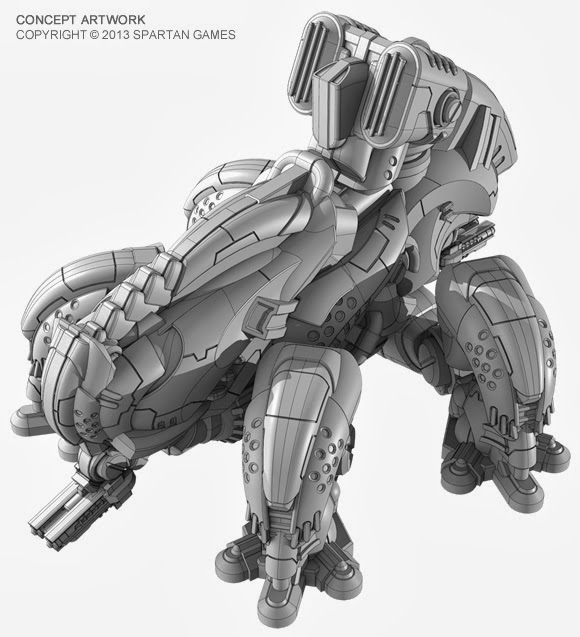 Posted by Miniature Player at 6:47 PM No comments:

Email ThisBlogThis!Share to TwitterShare to FacebookShare to Pinterest
Labels: Planetside

Terrain Board I made many many years ago...

I had this idea of making a terrain board probable over 10 years ago I think, and when I moved to Maui from Oahu I had given them to the owner of a local hobby shop so people could use it. Funny to see how badly the choice of color was for the board, but I was younger then.

He had dug it out recently and let people use it. It is pretty beat up and the brown is just bad. But as my first attempt at a large terrain piece it was fun to make. Though section is missing, he had 3 out of the 4 parts for people to play on. They are on 2x4 foot foam sections, somewhat interchangeable.  It can be setup in a number of ways. 2x4, 4x4, 6x4, 4x8. 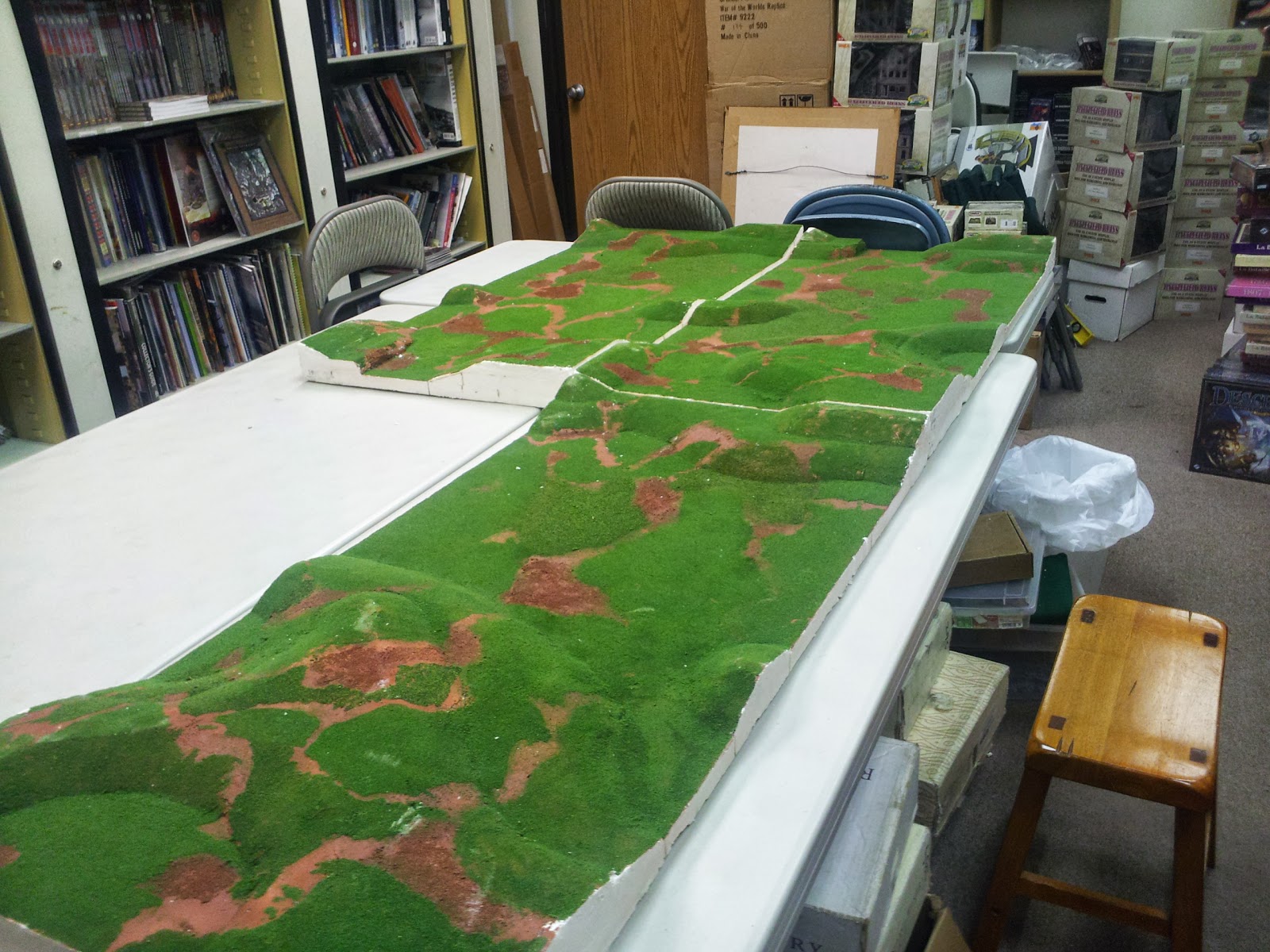 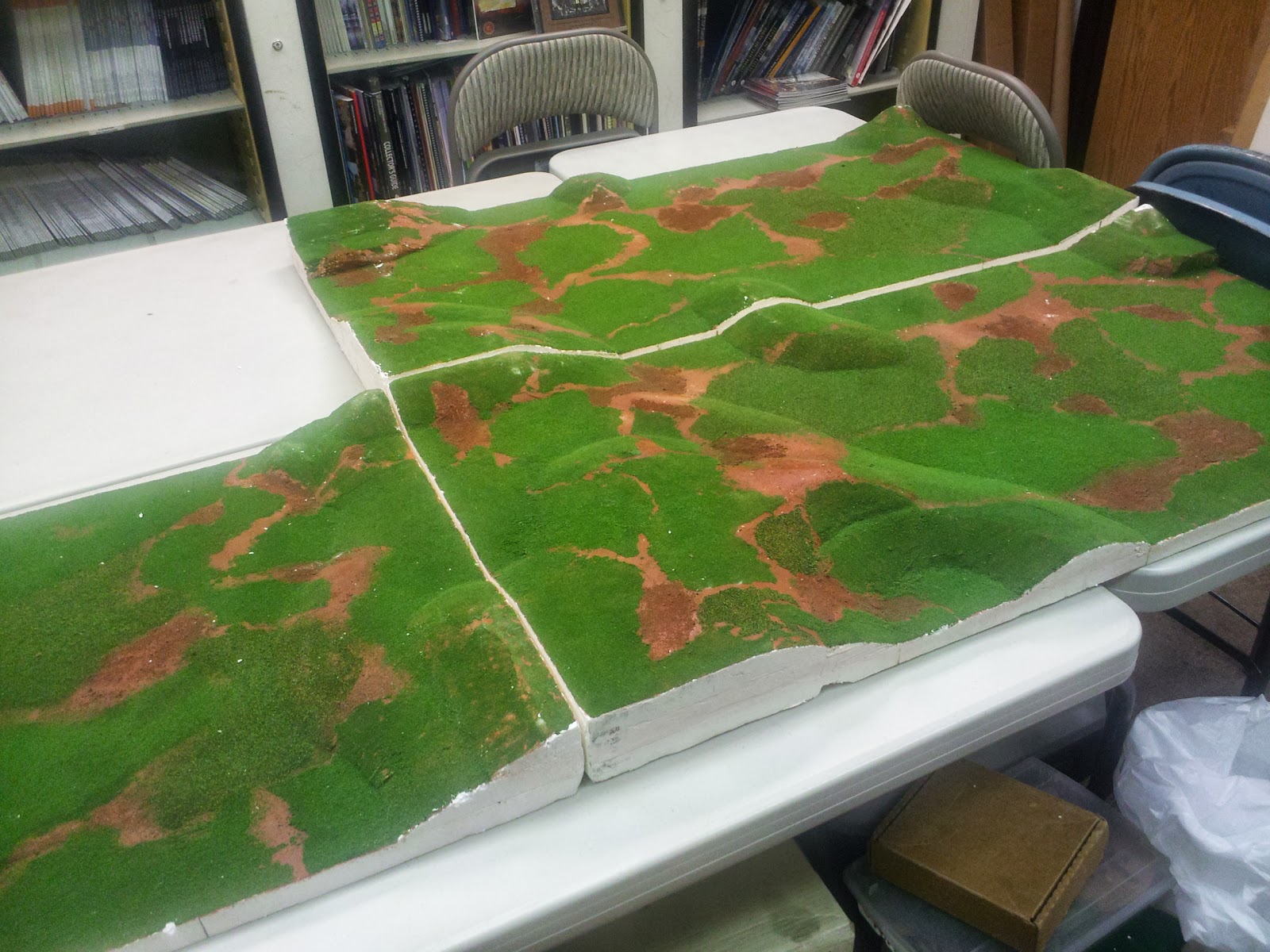 I may tackle something like this in a future date, but as it stands I don't got the space to tackle a project that takes up to much space.

With some work it can be passable once again as a playing surface.

Email ThisBlogThis!Share to TwitterShare to FacebookShare to Pinterest
Labels: Terrain

I was trying to figure out what they were. They were pretty beat up and painted (thickly) badly so there will be much work to get them back up to standards.

On a side note, I did not get to buy some Space Marine ships today from a friend who changed his mind on the agreed amount for the fleet, after he looked on the ebay prices of them. I guess he forgot about how I gave him OOP 40k Dwarves for free and the trade we had that was in his favor awhile ago.  Oh well, I was so looking forward to having those ships to paint up. The positive of that, is I get to keep my money I suppose.  =/

I am currently working on painting up some cargo ships for my friend who had two packs of them. I am thinking of painting a DHL, FEDEX, UPS ones up.  =0 The rest will be random stuff that I think will look good too.


Posted by Miniature Player at 9:18 PM No comments:

Been busy at work painting up a planet for tomorrow.... I mean todays game. It is past 12am I really got to sleep.

Ok, this is a work in progress of my red planet. I am pretty happy with it as it stands but need to touch up a tad bit and call it finished.

Looking at them side by side you can see the size difference I hope. I really like how the red came out, I did multiple laying in brushes then patches followed by more patches of paint.

I have two sizes, and wish to find a real big one, so I can make a Gas giant with a ring around it. If anyone knows of where to get a larger plastic sphere let me know.

Posted by Miniature Player at 12:49 AM 3 comments:

My first Planet I got painted up. I am happy with the outcome. I was going for a blue planet with different horizontal lines and grouping of blue across it. I am debating on putting a dark and light side to the planet or let the lighting in the room dictate the shadow effect.

I plan on doing a rocky red type of planet next, something like mars. I want to make all the variety type of planets from Battlefleet gothic and other scifi worlds out there. If you good links to cool looking planets put them below with a link.

More likely this will be the view one will see the terrain piece at. I may make a second pass of blue or a dry brush blue over this.

Posted by Miniature Player at 5:34 PM No comments: 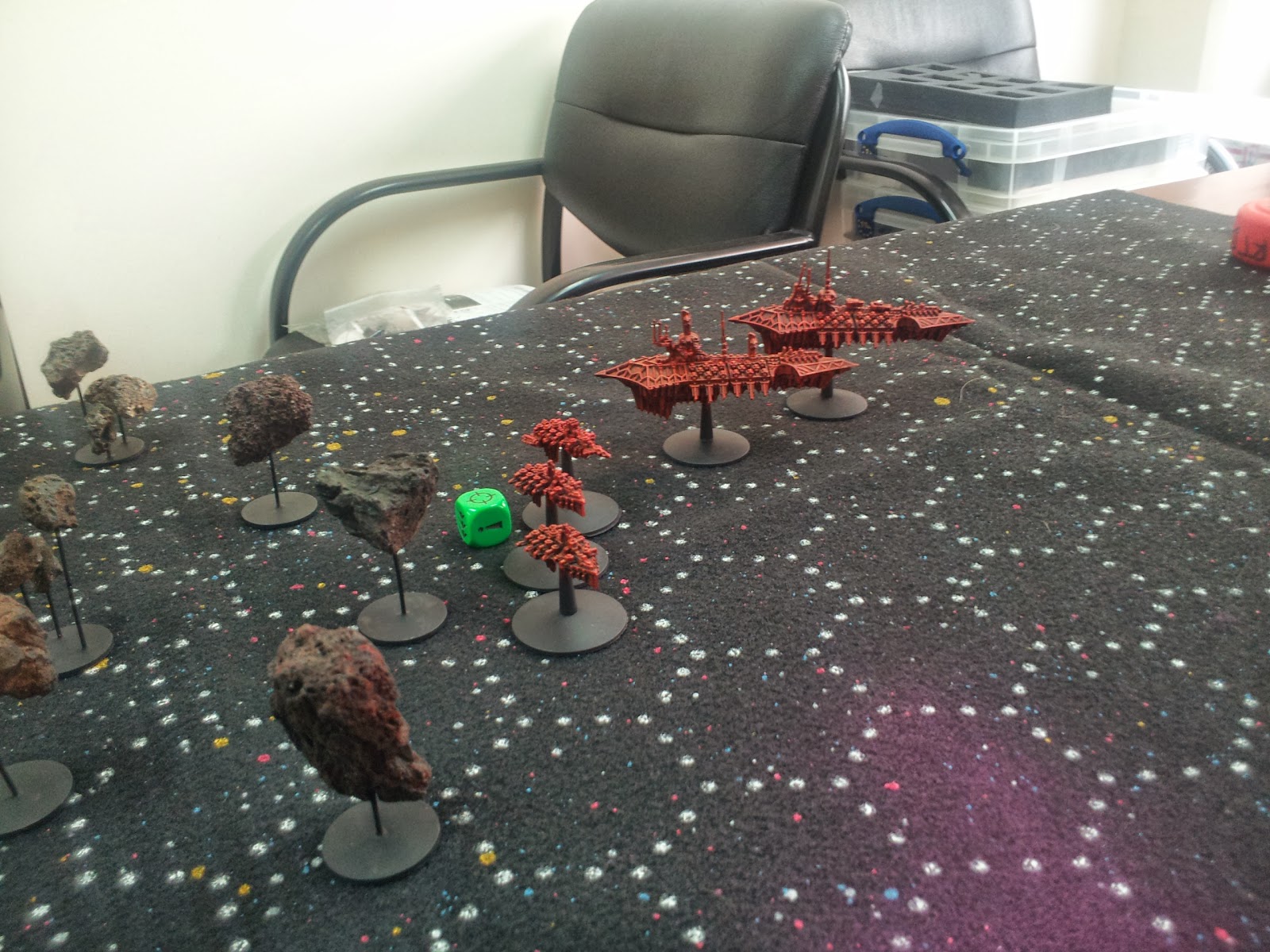 Posted by Miniature Player at 2:24 AM 4 comments:

I was in the store today and the store owner comes to me and hands me a BattleFleet Gothic ship because I told him I was interested in what he had left of Battlefleet Gothic and to save it all for me. Then I noticed the mark up he put on the item.  $25 for 1 cruiser really really sucked. What is up with that, right after I ask for the stuff he mark the product up to sell it to me. Granted some BFG stuff are priced all over the place online, it still bothers me that he did this right after I asked him to save me what he finds in the piles of stuff he has in his store and storage.

Oh well I guess I will look elsewhere for Battlefleet Gothic stuff I want and not think twice about it.  Back to just doing my own thing.
Posted by Miniature Player at 11:32 PM 3 comments:

I started up some asteroids for BattleFleet Gothic and other space games. I plan on making perhaps 30 or so of them.

Once I paint the bases and post they will be a done deal. 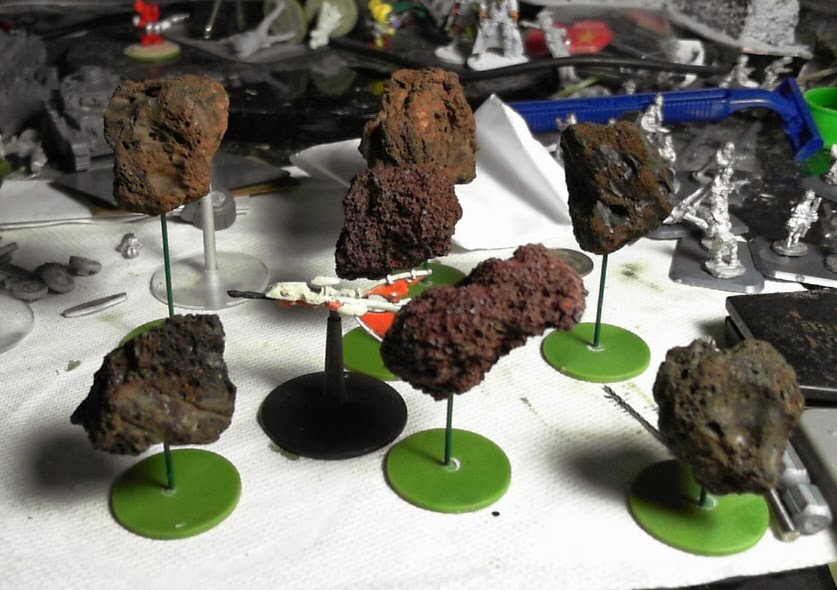 Posted by Miniature Player at 3:47 PM No comments:

BattleFleet Gothic more more more stuff dug out from my stash of stuff.

Here we have more Craftworld Eldar, my god I painted these badly. Time for a repaint I say. I also have a few of the Jovian ships I will use as transports I suppose.

PS ignore the messy table, been jumping around from project to project and I use my computer desk as my painting station. =( 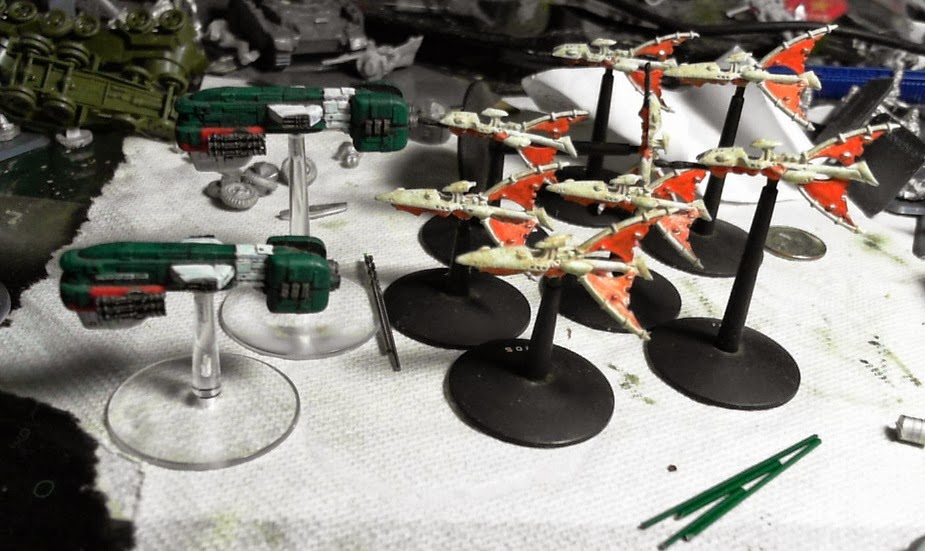 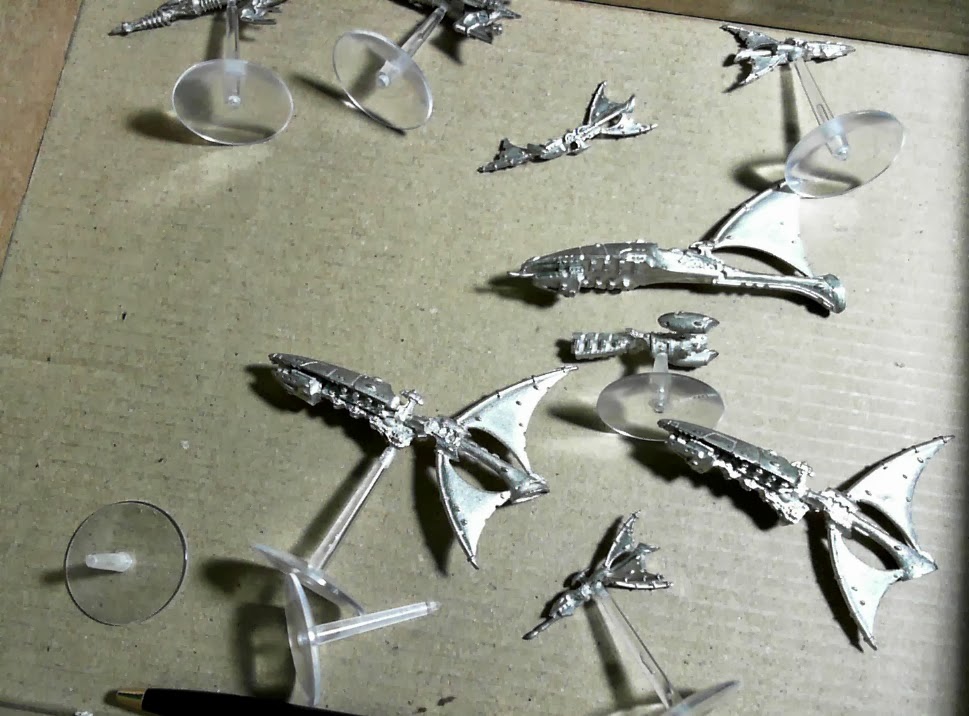 The total count for my Craftworld Eldar will be the following:

I am debating on selling off another 12 Shadowhunters (45 pts/ea = 540 pts) or just keep them, for escort swarm.

Posted by Miniature Player at 11:11 AM No comments:

Having two games of Battlefleet Gothic with my friend Richard B.. I wanted to try out the BFG:R rules and so far I really like the changes for the better. In our first game we use the MMS (Move/Move/Shoot) rules of the eldar. This brings them more inline with how the other ships work in the game.

Ok, well that didn't work at all, the two chaos cruisers brace and don't really get touched a tad.


I ended up losing all my ships to the Chaos fleet. The Mission was rough for my eldar, to say the least.


Ignore the Nova cannon, these two have torps.

In front is a Gothic Class Cruiser, there to protect my Nova Cannon armed Cruiser behind it. 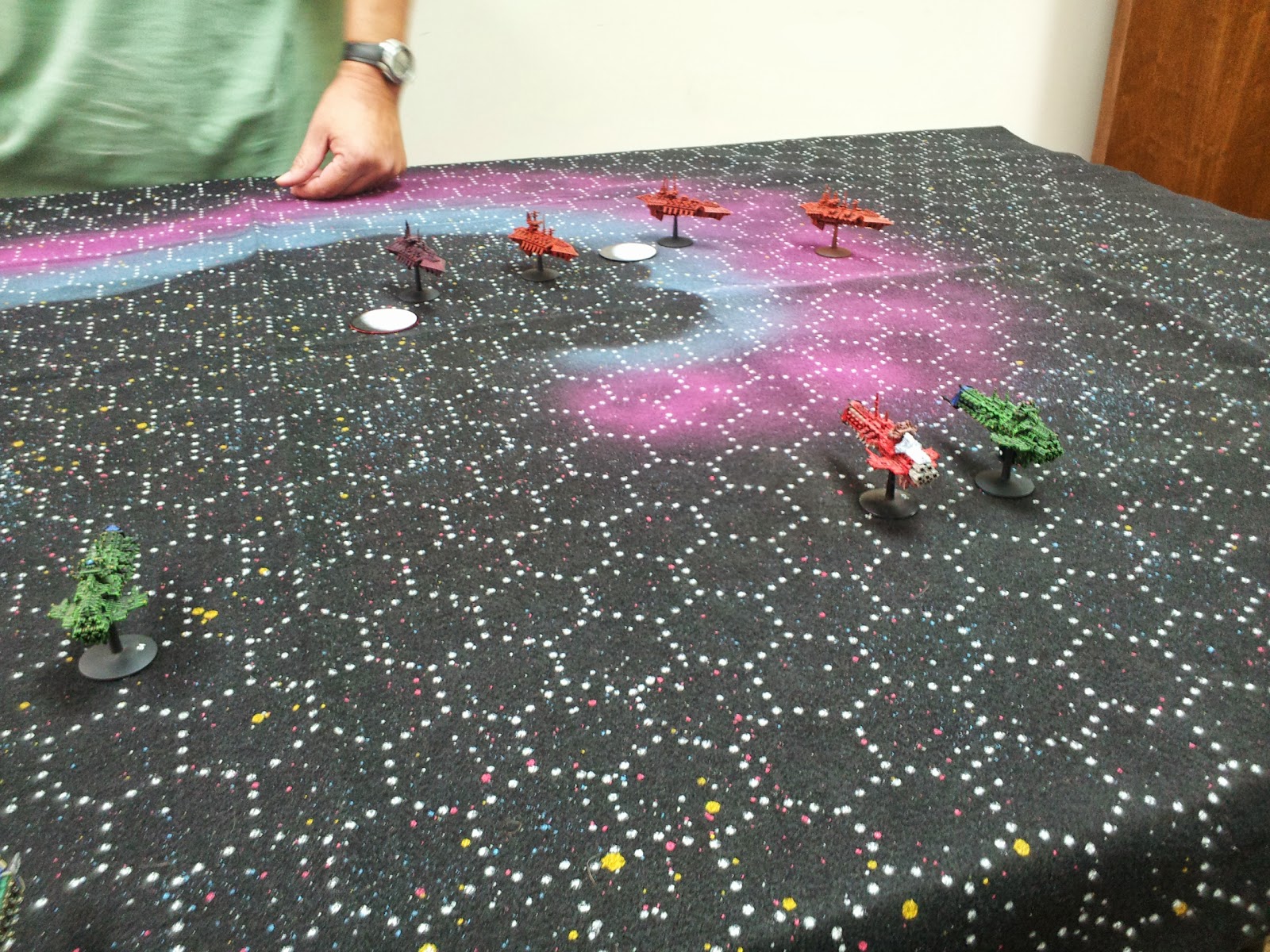 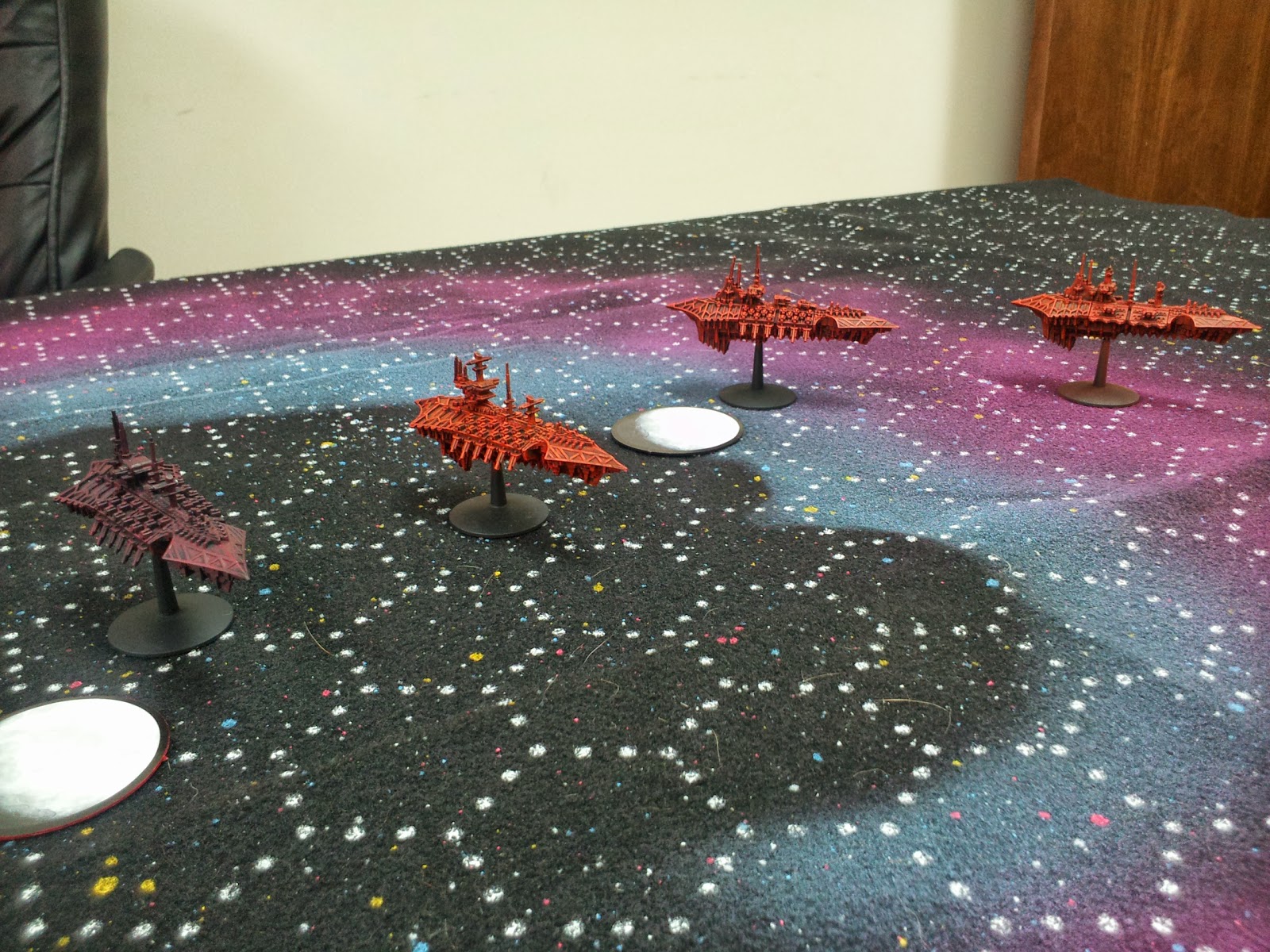 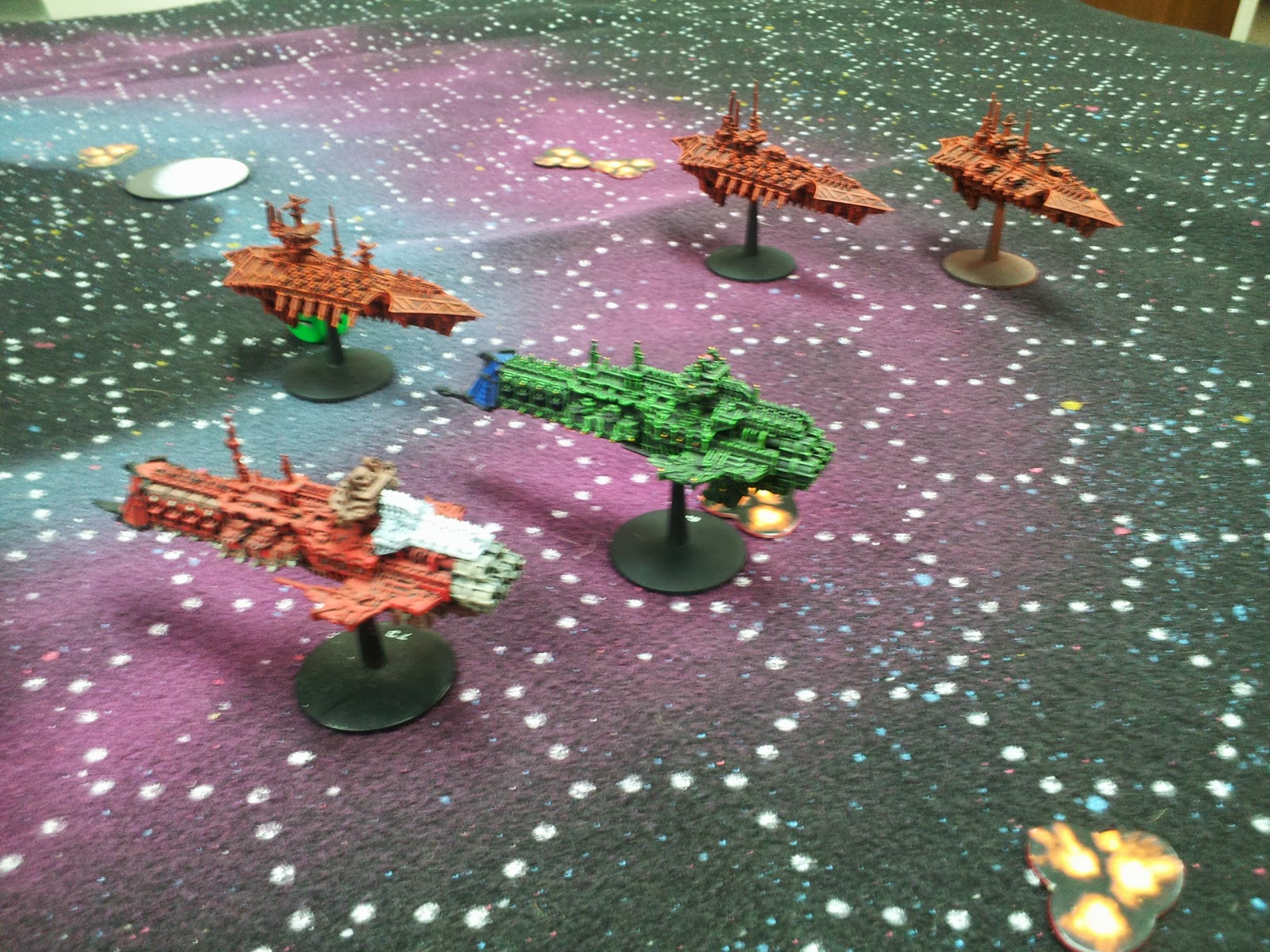 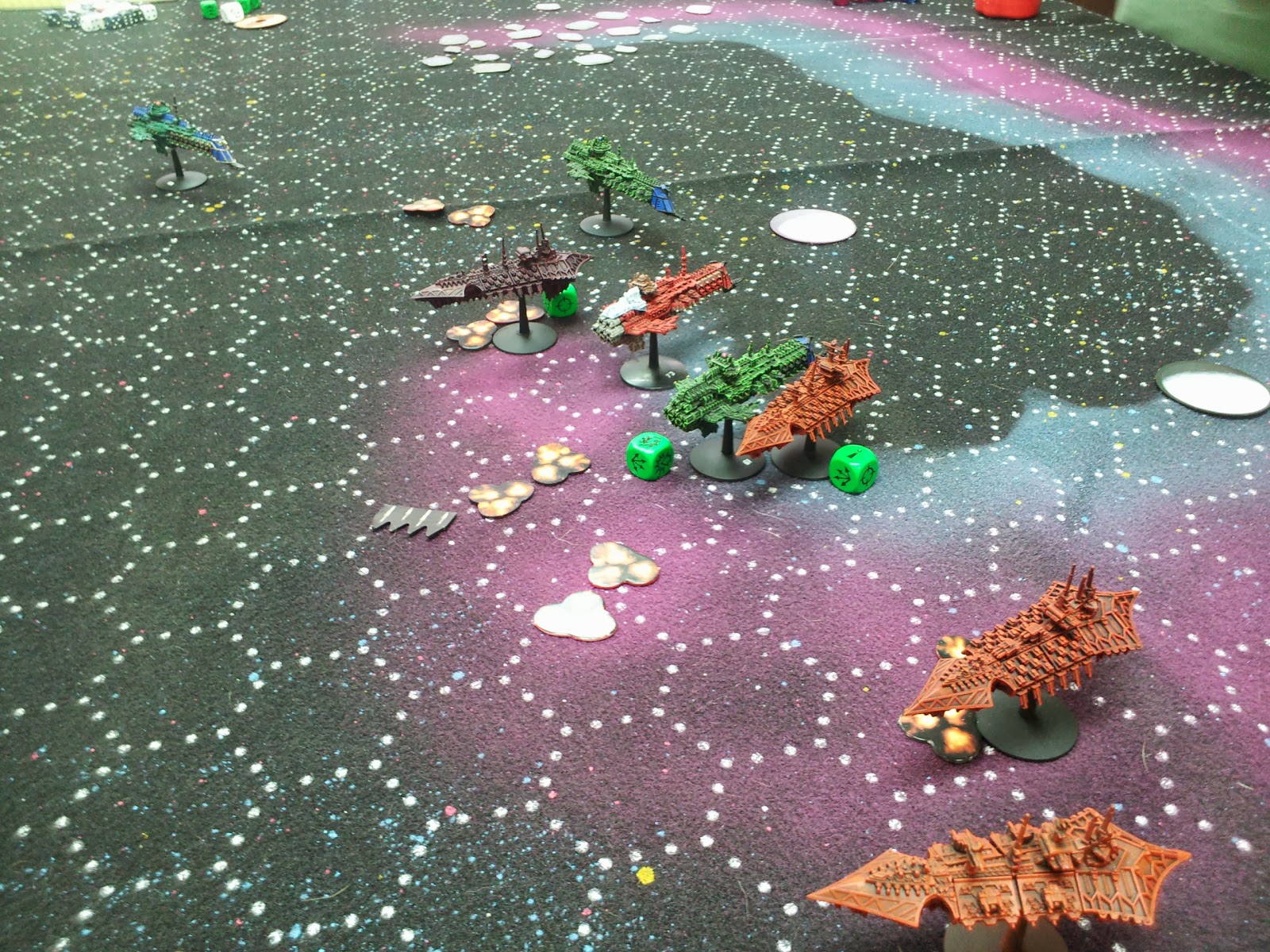 Having two ships crippled the bad smelling Chaos make a run for it. Taking a few more shots on the way out. 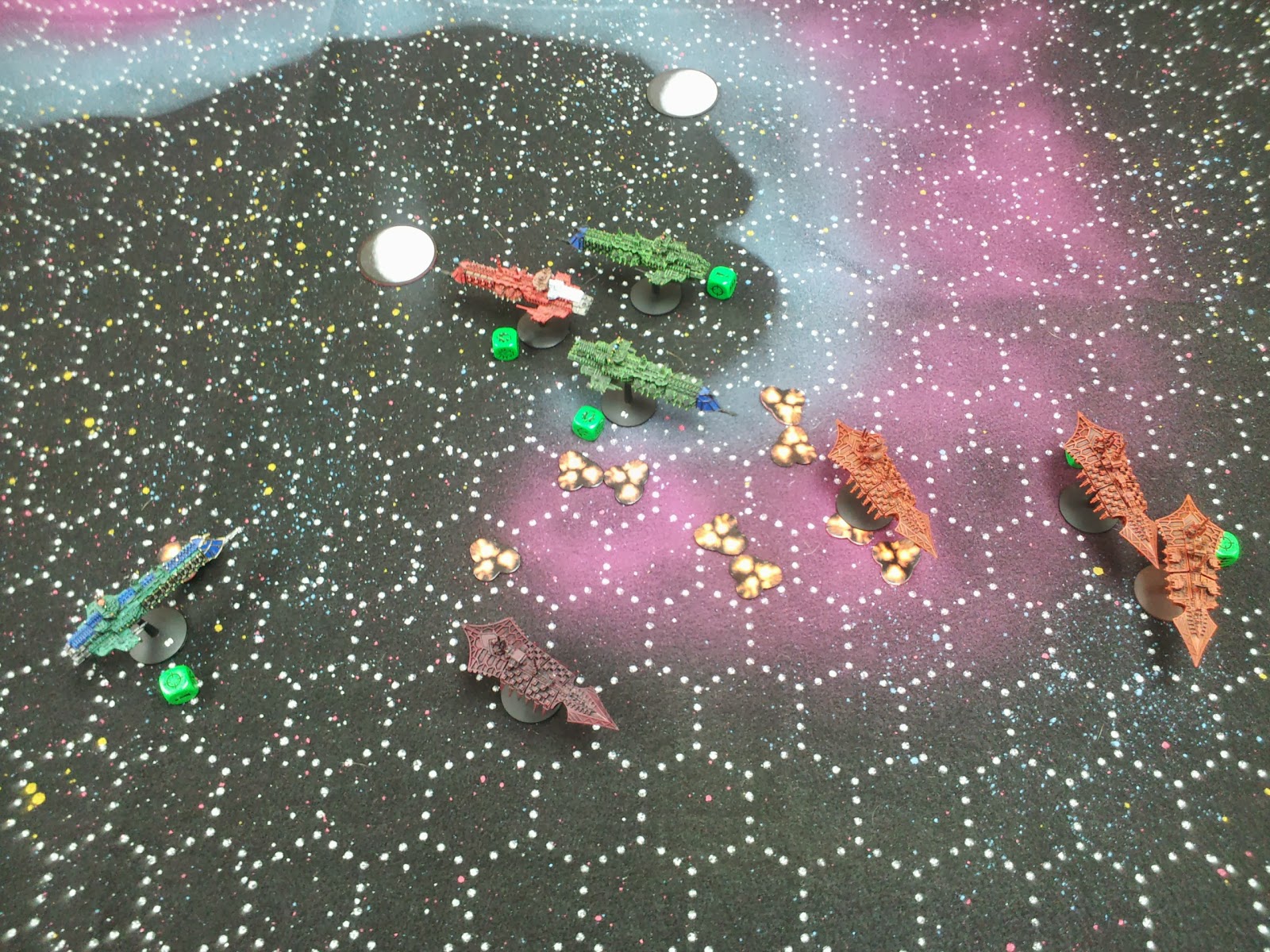 
Last Chance to take him out with a nova cannon shot, which only did 3 hits and my torps failed to score, the Chaos Cruiser leaves the battle space.

Great game but I will have to fight that same Chaos fleet once again because I didn't get one kill out of the bunch.