I have hit a wonderful milestone and figured out an answer to my problem. Now I am just typing away in the data and will hopefully be working on the layout and final production of the army list generator in excel.

Following this it will hopefully be ported over the pdf, and perhaps a android app down the road.

Posted by Miniature Player at 11:48 PM No comments:

This is a WIP. I uploaded a youtube video to explain and show how the list generator will function.

Posted by Miniature Player at 11:43 AM No comments:

my layout is messed up on my blog....

Not sure what happened but my layout is messed up, going to try to fix it.
Posted by Miniature Player at 2:12 AM No comments:

We played a 614 French vs 728+ point British force. Though at first we thought we were playing a 600 vs 600 game per side. On the British side was Mark and Brian vs the French who was played by Richard and I. The table was 8ft x 5ft. French objective was scouting, the British had Defence I think.


Two units of British Regulars deploy one deployed in line in front of the building, the other in the tall corn field, with a Officer newly arrived from the new world with them. Behind and left of the house is a hidden skirmishing unit, we believe to be Rangers. (ignore the british flag guys there not part of the unit just for looks).

Bringing onto the table are two our a French Regulars, who promptly formed line and unload into the british line. Losing to many men the rest of that British unit turns and routs leaving their colors behind. Oh the shame of it all.  Soon after followed onto the board with French Chasseurs in the corn field.

Revealed unit of French Indian allies attempt to use the steam banks for some concealment near the middle right of the board.

Indians with bows show up and move to get around the skirmishing French Chasseurs. This is the aftermath of the Indians charging into the British Regulars who make the awkward mistake of staying in Difficult Terrain. The British Regulars being reduced by musket and bow fire are reduced. Then charging in the indians let loose their tomahawks and crush the British, leaving two men with their Officer, who tries to keep them from fleeing. (the flag men and drummers are aesthetic markers not troops on the board).

British Rangers soon after make it to a tree line where they shoot into a French Regular unit who was caught in line. Being finally reduced to five men. Our Canadian Militia moves around the left to try and scout out the far table quarter, while another unit of indians start to advance to the flank of the Rangers.

On the left of the picture the Rangers are charged in the flank losing 3 to 4 men and take flight towards the house, they get caught in a hail of musket shot and Point Blank range and a destroyed. The two men and officer are run over by indians in another melee, then take up potions on the fence line.

(No Photo Available)
After squaring off in the middle for much of the game without shooting or being shot at I finally take a chance and run two units of indians out from cover towards the defending building near the middle of the table, one gets torn apart from two units of skirmish british who were on Vigilance.  Reduced to 2 men, I run them back to the words. The other unit of indians are not fired upon.

This lone 6 man unit of Indians rush a unit hiding behind good cover, throwing tomahawks needing a 6 to hit, and 5+ to kill. I luck out and kill two, then making contact I hit 4 and the British fails all 4 saves who needed 3+ to save. 1s and 2s !!!! I lost a few indians. With the british unit running, I catch up and attack once again where by the british and indian unit kill each other off to the man.  11 british unit to 6 indians I think was a good exchange.  =)

Posted by Miniature Player at 4:57 AM 2 comments:

Email ThisBlogThis!Share to TwitterShare to FacebookShare to Pinterest
Labels: AARs, Muskets and Tomahawks

Someone asked if anyone was building or had an excel spreadsheet for "Muskets and Tomahawks" on the forums. I chimed up and am busy at work creating just that.

Basicly a pull down menu for people to create and then be able to print the file out of their army list. I been thinking of making a generic format rather then create every single type presented in the rule book. This is because I feel it would be more useful for modifications for other mods of the game system to be played in different areas of interest such as the American Civil War or the like.

I hope to get something more set in stone by next week, but right now I need sleep because I have a game today at 10am and I want to wake at 9am. Take care and let me know what you think.
Posted by Miniature Player at 4:37 AM No comments:


Current status.... I am so tired but will not be able to paint tonight after work, need to sleep before the early morning game. This is the most I have painted in a short time, based on my speed of painting. I could go on and on adding shading and little details but as it stands this is good enough.

Pending I get my act together and order the ground cover I been eyeing for some time.  Enjoy!!

Posted by Miniature Player at 7:09 AM No comments:

Indians, feel like I can't get anything finished finished.

I been busy working on my Indians as you know, but feel like I can't them finished finished. I still have to order some ground cover I wanted to go with them. I could use what I have but feel it may not feel right.

I will see what I can finish off tonight perhaps finish off the 4 and get more prepped and cleaned up. I still have another 25+ indians in a bag sitting someplace. but want to work on some british stuff soon enough.
Posted by Miniature Player at 3:55 AM No comments:

Got a 1v1 game in with Brian. Here are some of the pictures of that game. There was another game after this 2vs1 with Brian, Richard and I, but I forgot to take photos of that one.

The green sheet overlap was the boundary line for our game.

A 200 point game, I started off with my Indians all hidden. My goal was to move 2 markers from the north end of the board and from the south 3 markers (one of these was a dummy marker). Brian had setup one unit to cover to protect the villagers. Off to the left outside of camera view I had another marker moving from west to east.


I took up a position on the south side of town. I survived being shot at and later I return the favor to no luck.

I Ambush from the north, taking up potion and firing arrows down onto the defenders, taking one out.

Oh the glory of taking one of his guys out with the trusty bows and arrows.

My brave warriors spend no time to reload and attack some of the villagers, two women and their babies in hand!  Oh the horrors they will face from my powerfully built indians!

Though I took down two women with my hatchets, one of the females must have gone mad with fright and set upon one of my indian, fatally killing him with a swift kick to the low hanging fruits.

Brians reserves arrive and set upon my warchief, 3 on 1.... he stood no chance.  Soon after he rushed the bow armed indians and they to promptly died and ran.

Here is an update for my Indians, well I am tired and need sleep before heading out to play in about 5 hours.

This will have to do for now. I will do the flocking and ground cover at a later date. Going to have to work out some details for that. 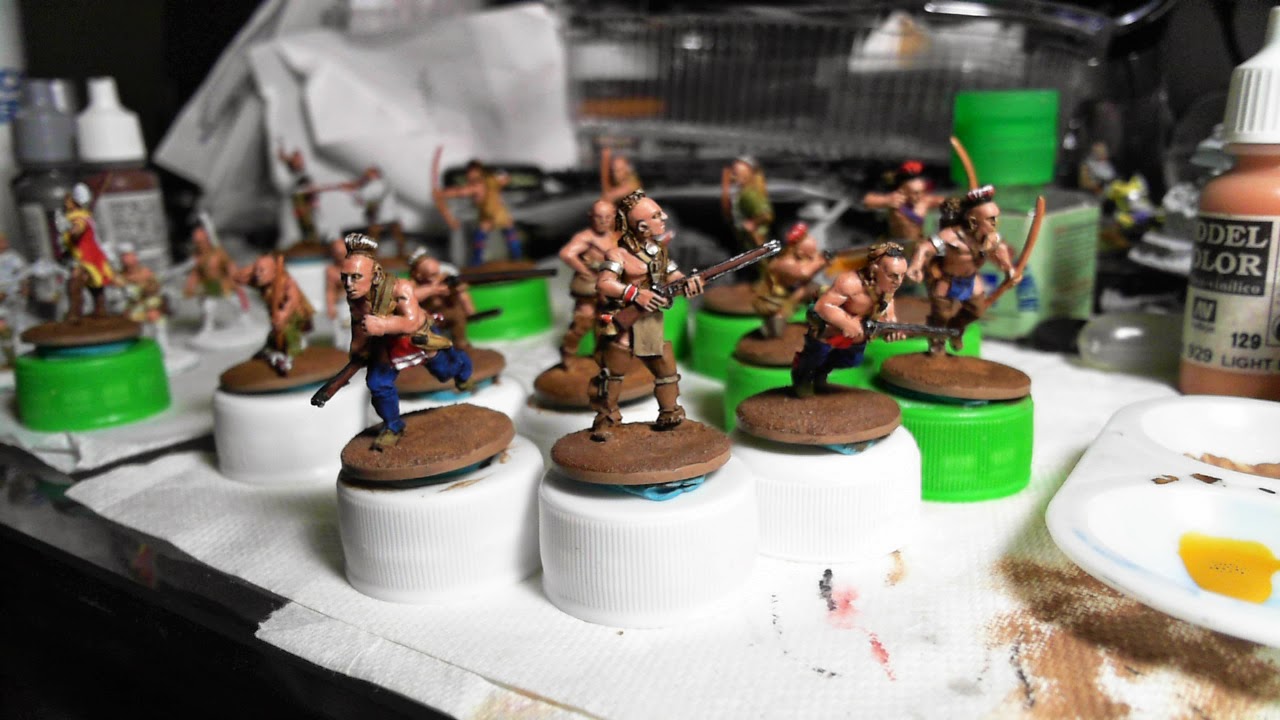 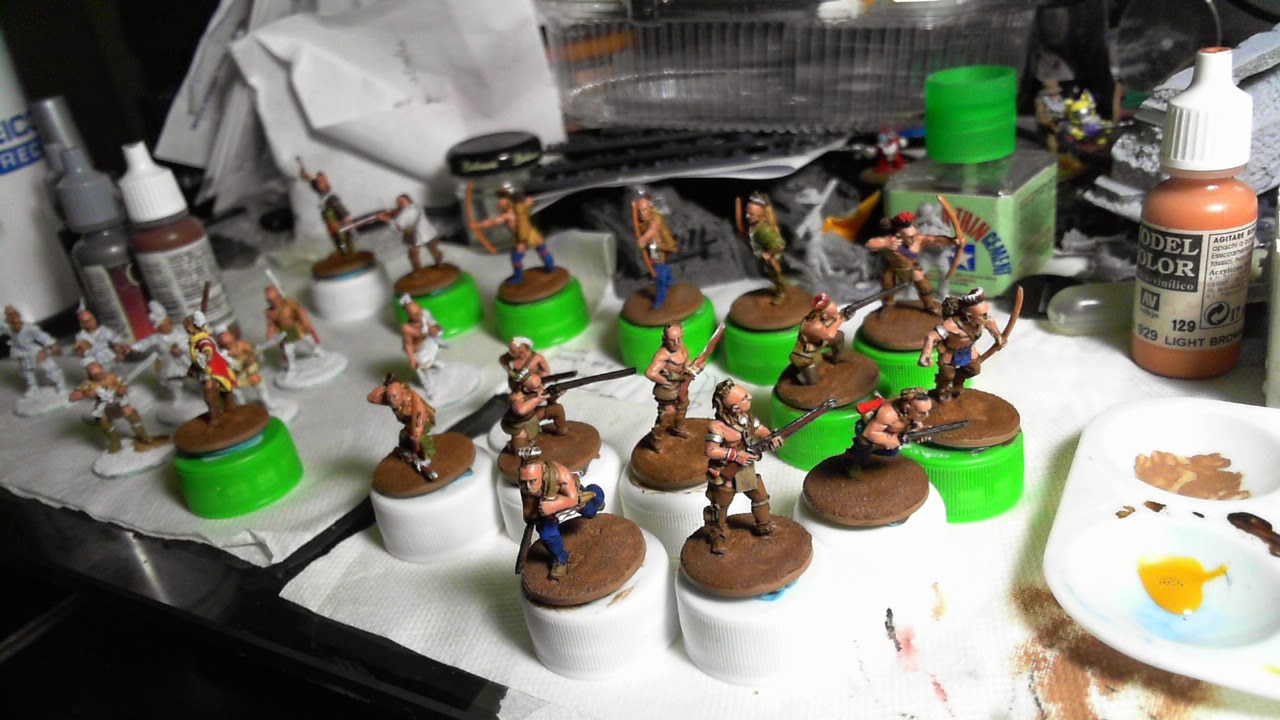 Posted by Miniature Player at 5:28 AM No comments:

I am moving along with my painting of my indians. I hope to get at least 20 done by this sunday, but am running out of time. Here are five miniatures I had been working on at the moment. There are many little things to be done, but all major parts are painted to some effect. The one with the white shirt hasn't been painted but will get to that soon enough. 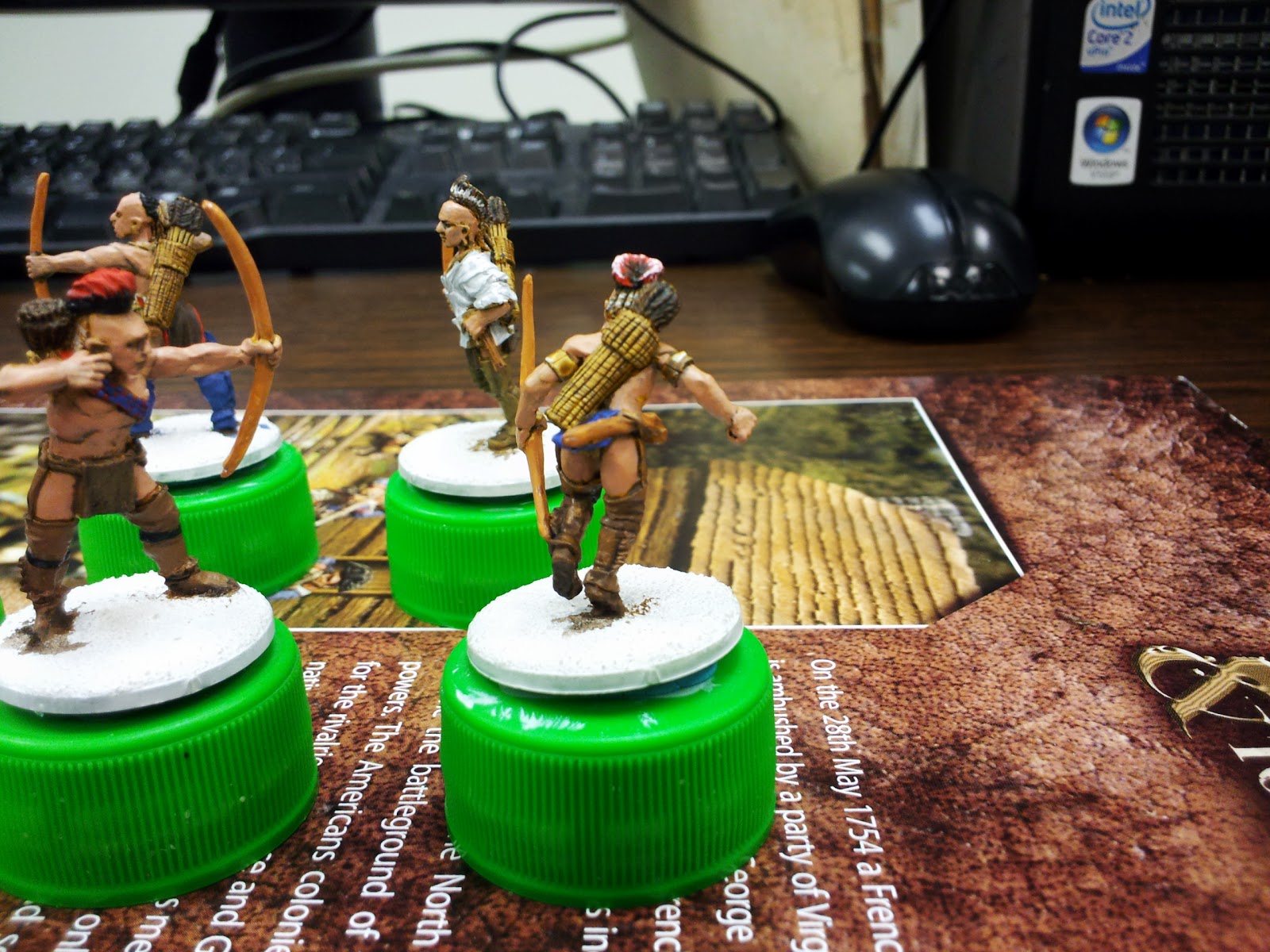 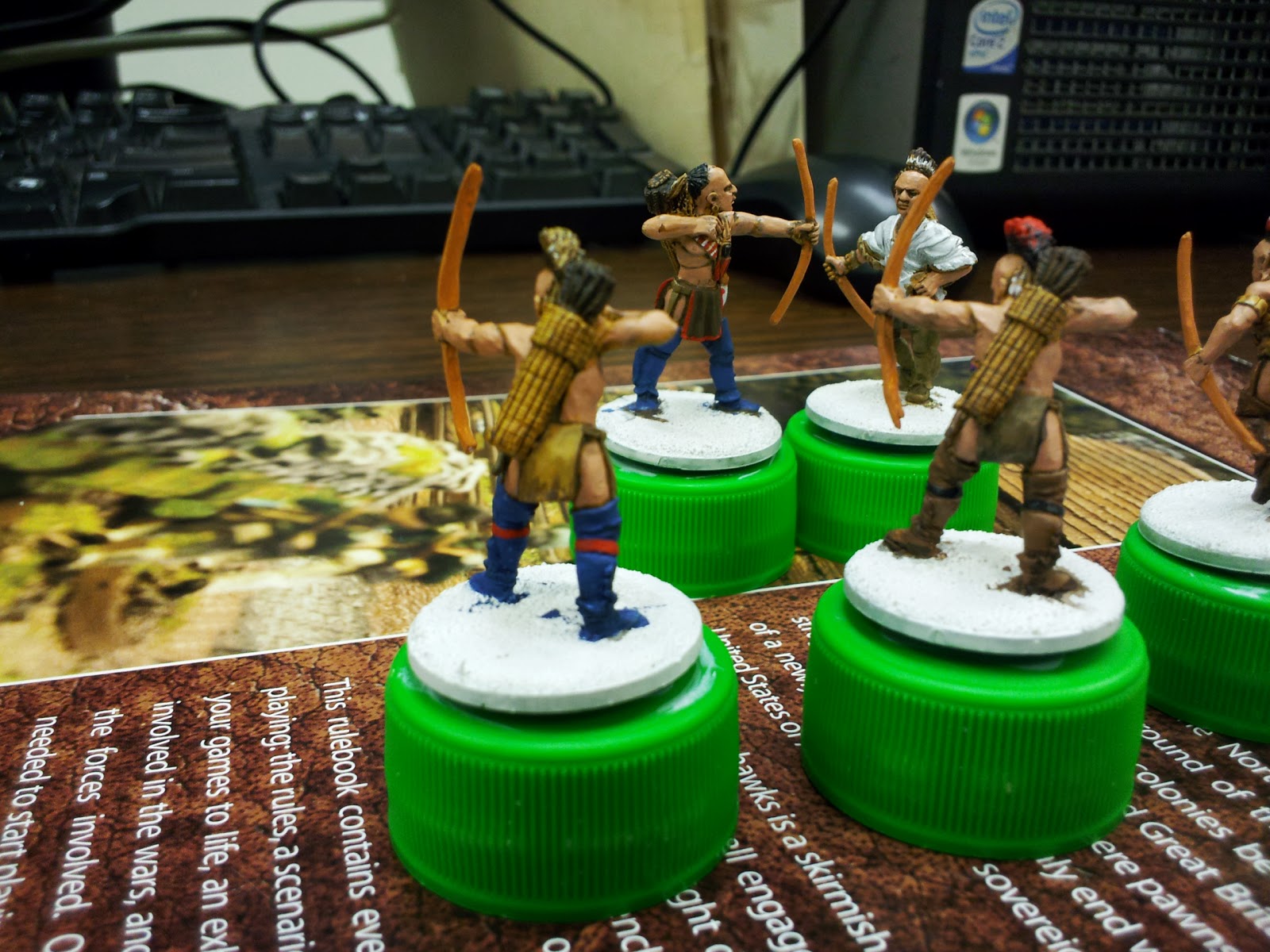 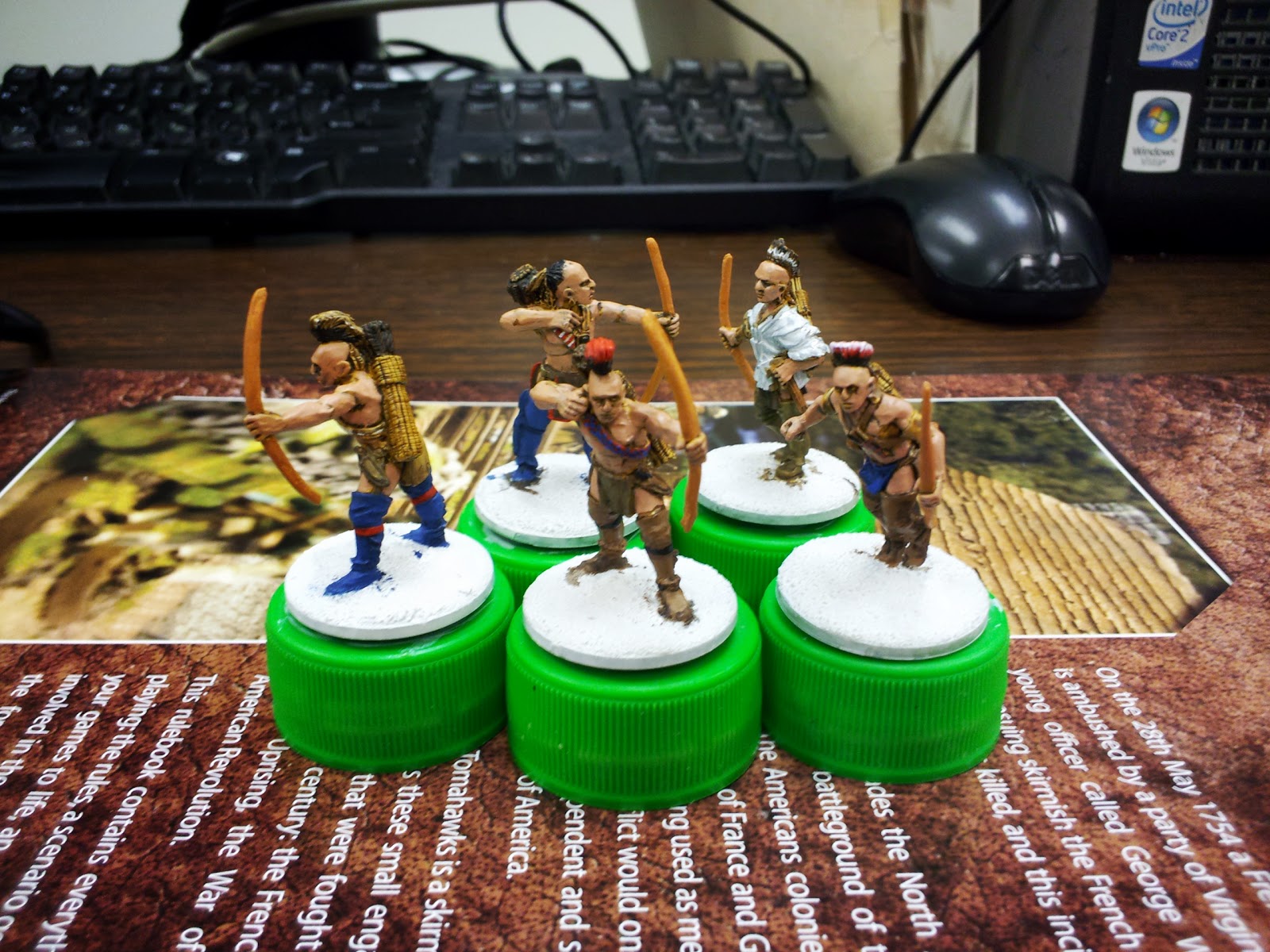 Posted by Miniature Player at 1:35 AM No comments:

Mongols for Deus Vult by Fireforge!!

Ok I will forgo building to many knights and wait for these to come out... sweet!!! Mongols by Fireforge 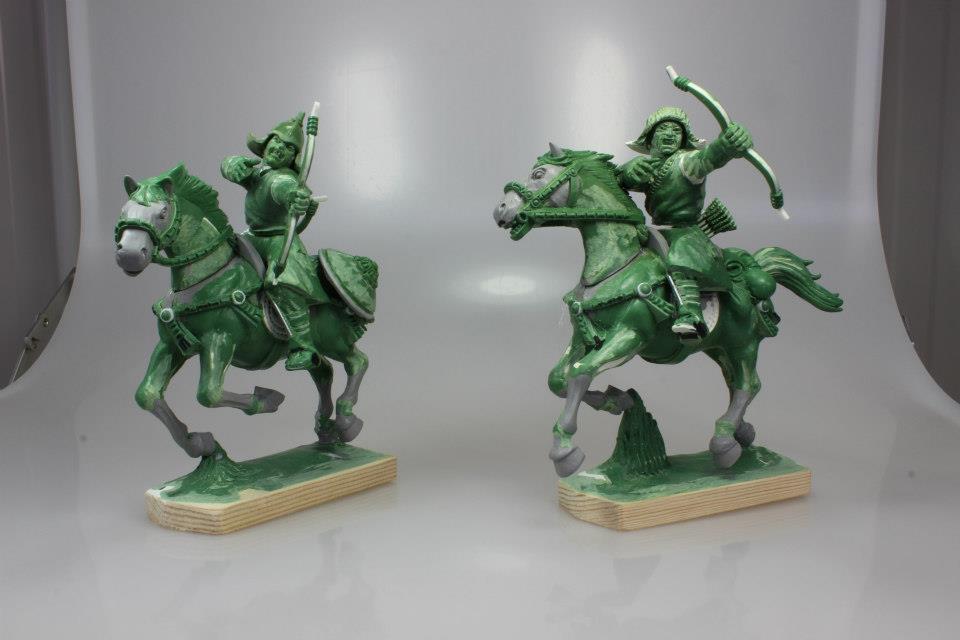 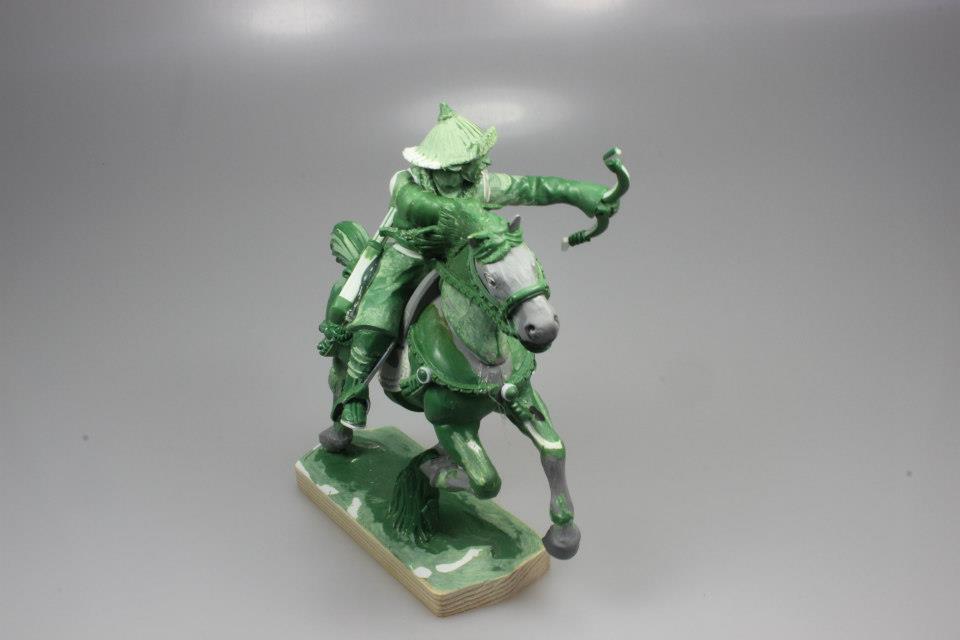 Posted by Miniature Player at 4:35 AM 2 comments: