Flames of War - been a long while last I played a midwar game of flames!!!

Midwar game of flames at 1750pts, my Soviets vs Germans.  It was the surround mission and I was stuck in the middle. 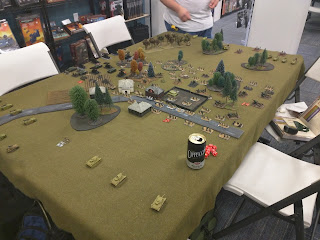 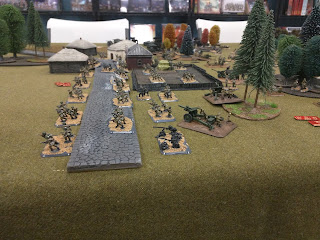 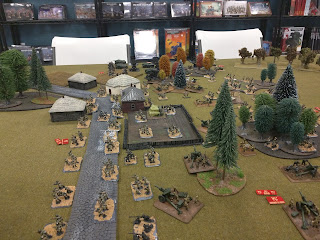 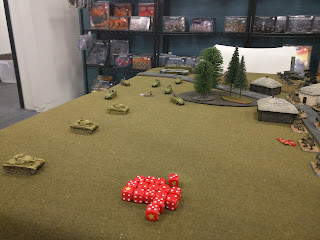 The poor german troops in their half tracks took a beating, I got two good shots off with my SU122 needing sixes to hit. Took the lead half track with fire from one of the 76 guns.

I forced the retreat of these by bailing a half track

To keep them as far back as possible I make a push towards the panzer 3L I think they were.  George ended up gunning down close to half of this unit.  The unit started off with about 35 stands or so. 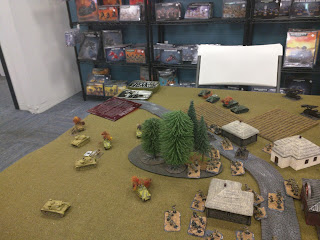 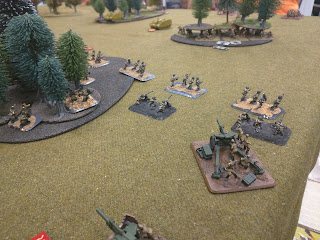 He tried to bait my left with the infantry holding up in the woods. Those two assault guns were tearing up my forces from turn one.  They make their move out to help in assaulting my infantry.  He didn't count on the few pioneers within the unit, took out one of them and force the other back.

Forced the tank to fall back, and destroyed the infantry.

George conceded the game, on the left I had destroyed the panzers, and he had pretty much just one tank to try and run through my line. His artillery did well, but he lost the mortar half tracks.  My rocket battery held up well lost half of them but they did tie up forces and pinned well enough.

Been a good game and hope to get another under my belt and posted online.  I did play a bunch of games between post and failed to put them up.  Happy gaming people!

Posted by Miniature Player at 9:25 PM

Email ThisBlogThis!Share to TwitterShare to FacebookShare to Pinterest
Labels: AARs, Flames of War