Trying to learn the game Force on Force with Ken. Though we played a bunch of things wrong I think I will need more games under my belt till I get the feel and rules correctly played. Played three games, but got bogged down because my friend wanted to speed things up without looking up rules. That wouldn't have been a problem if this wasn't a learning game, which I thought we had discussed before playing on last Saturday. 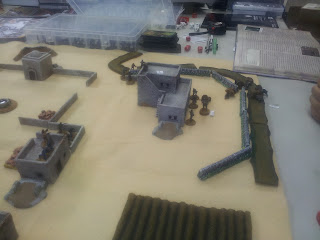 Here is where I got very good rolls in and he had pulled a gas mask card which total destroyed his US forces ability to fight well.

The other games didn't go as smoothly due to using the hidden rules and initiative rules wrong, but over all I had fun that day.
Posted by Miniature Player at 1:42 AM

Email ThisBlogThis!Share to TwitterShare to FacebookShare to Pinterest
Labels: Force on Force