Here is a bunch of pictures in during a 2v2 game with Richard, Mark, Pat and I. I tried out a camera I got and still learning to use it, I tried messing with manual focus but I think that didn't work out so well in some photos. Also I think the F stop was set to low because the depth of view was not that good on some. I believe the game was a 2590 pts a side.


Below you can see that the Jordanian's and Egyptian forces are massed for the attack. Because of the mission and it was an armor force vs armor force, Mark and I only had 1 unit of infantry and 1 tank platoon in ambush to hold off the massed formations in front of us.

Though Mark, Pat and Richard thought it was a one sided game, I reassured Mark we got a good chance to still win.

Large armored force so very close to our only deployed platoon on the board. Still to far for them to assault us though, so all is well. 
After a bunch of shooting and artillery fire our Infantry hold ground.

Our Turn one, I bust out my reserve unit, and fire at the  SU100M platoon near the tree line.


These Magach 3 and Magach 2 CiC done it boy!! Ambush ambush ambush! (note: we made a mistake on having a higher command team join in with the ambush, which isn't allowed, good thing he really didn't do much from there)

Some T55s on our left get a few shots also from the ambush also. 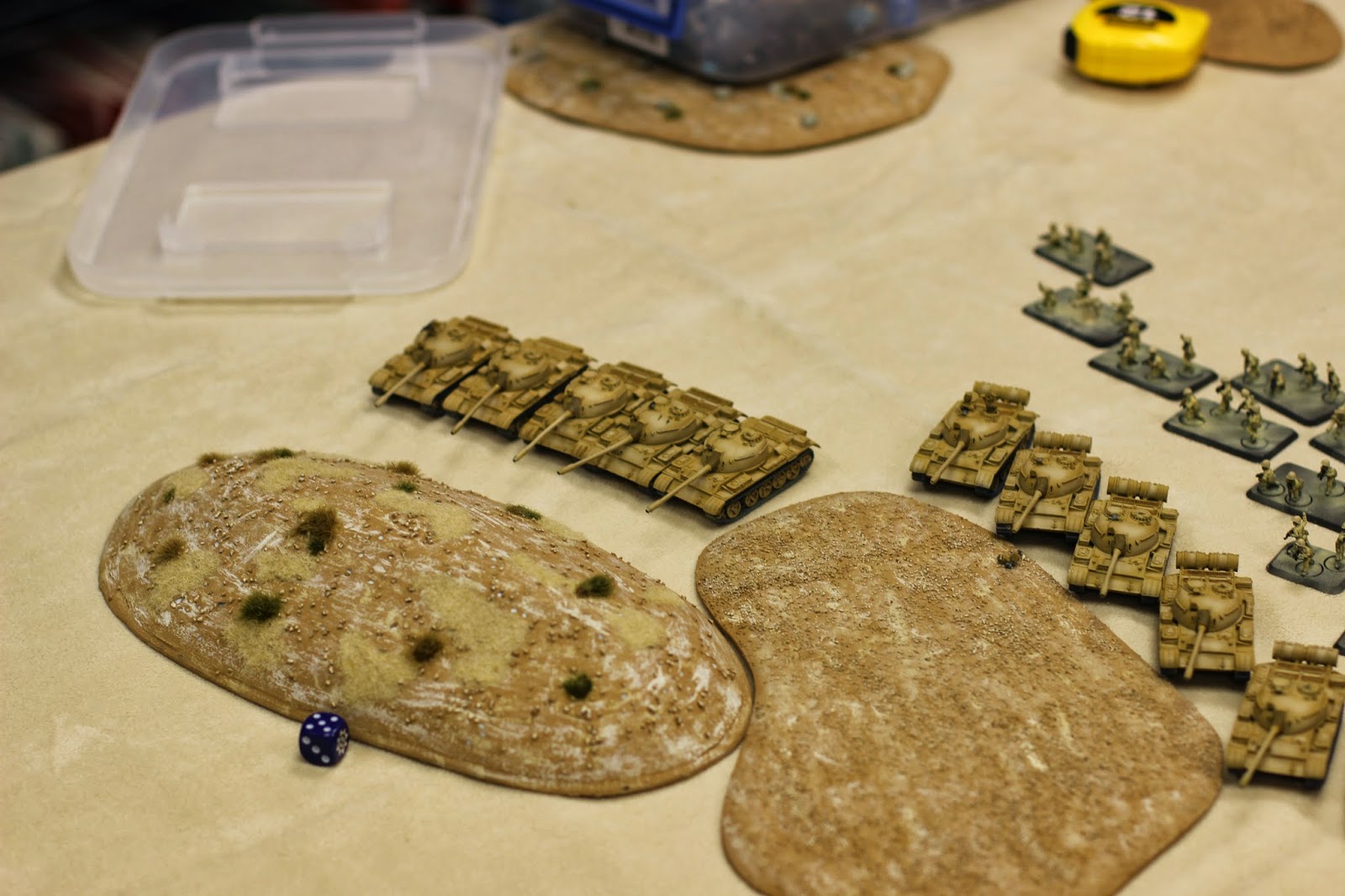 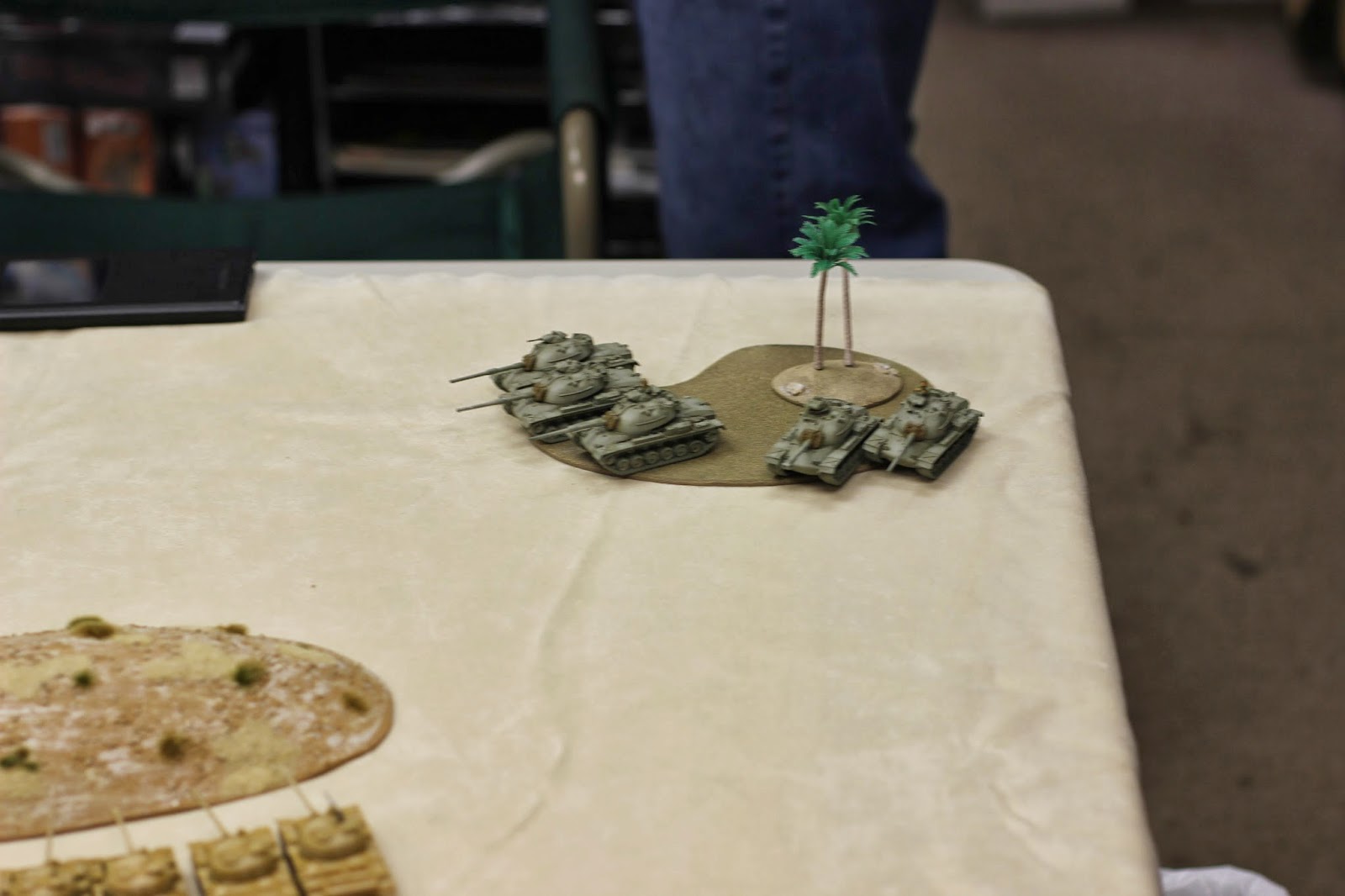 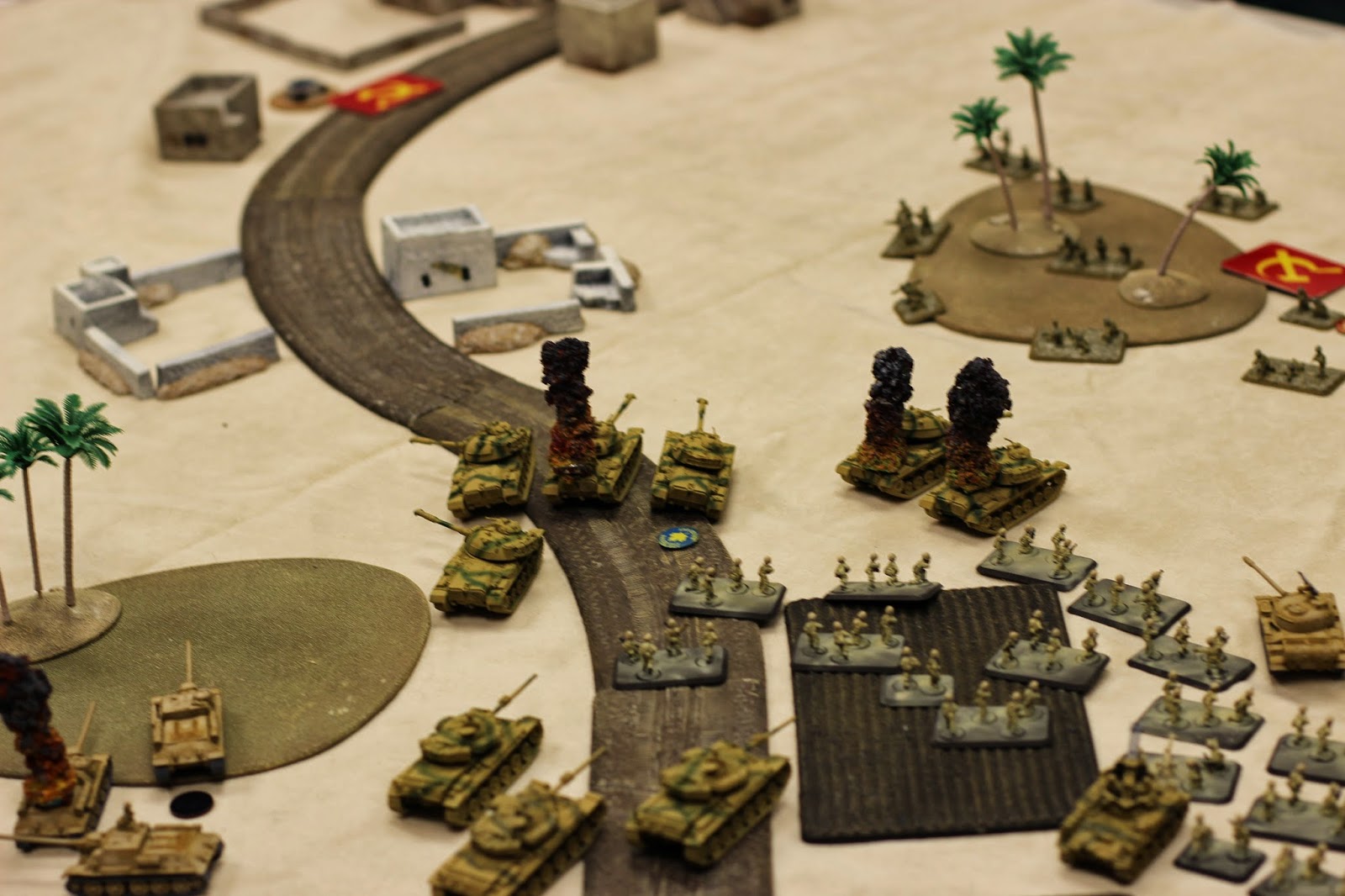 New turn, the rush up the center with what is left the the middle forces trying their best to surround and crush the infantry. 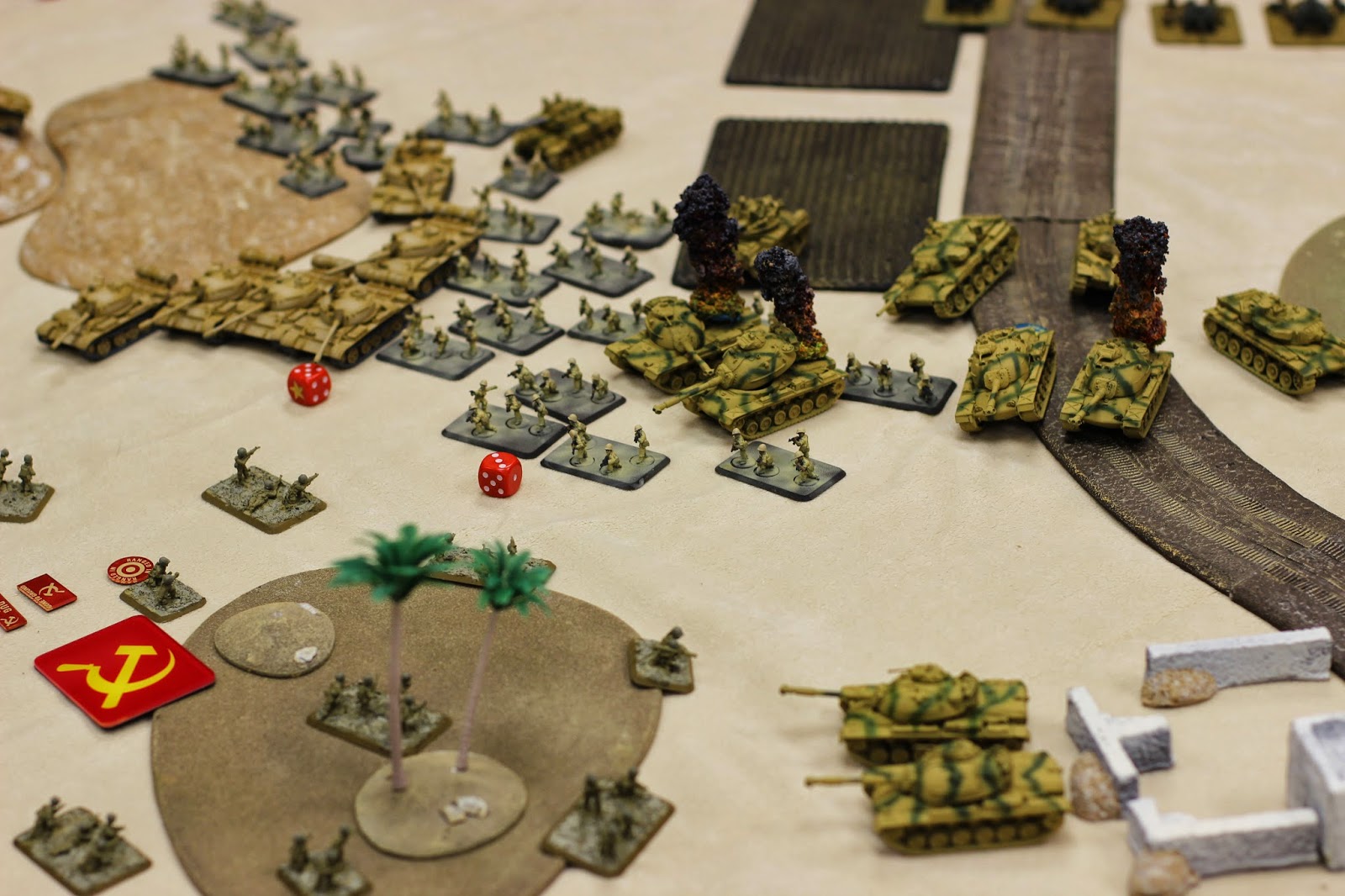 2 red dice to mark where the front of the 12"x12" bombardment will repeat mission. Infantry charge in for close combat, but only manage to push our Israeli infantry back. 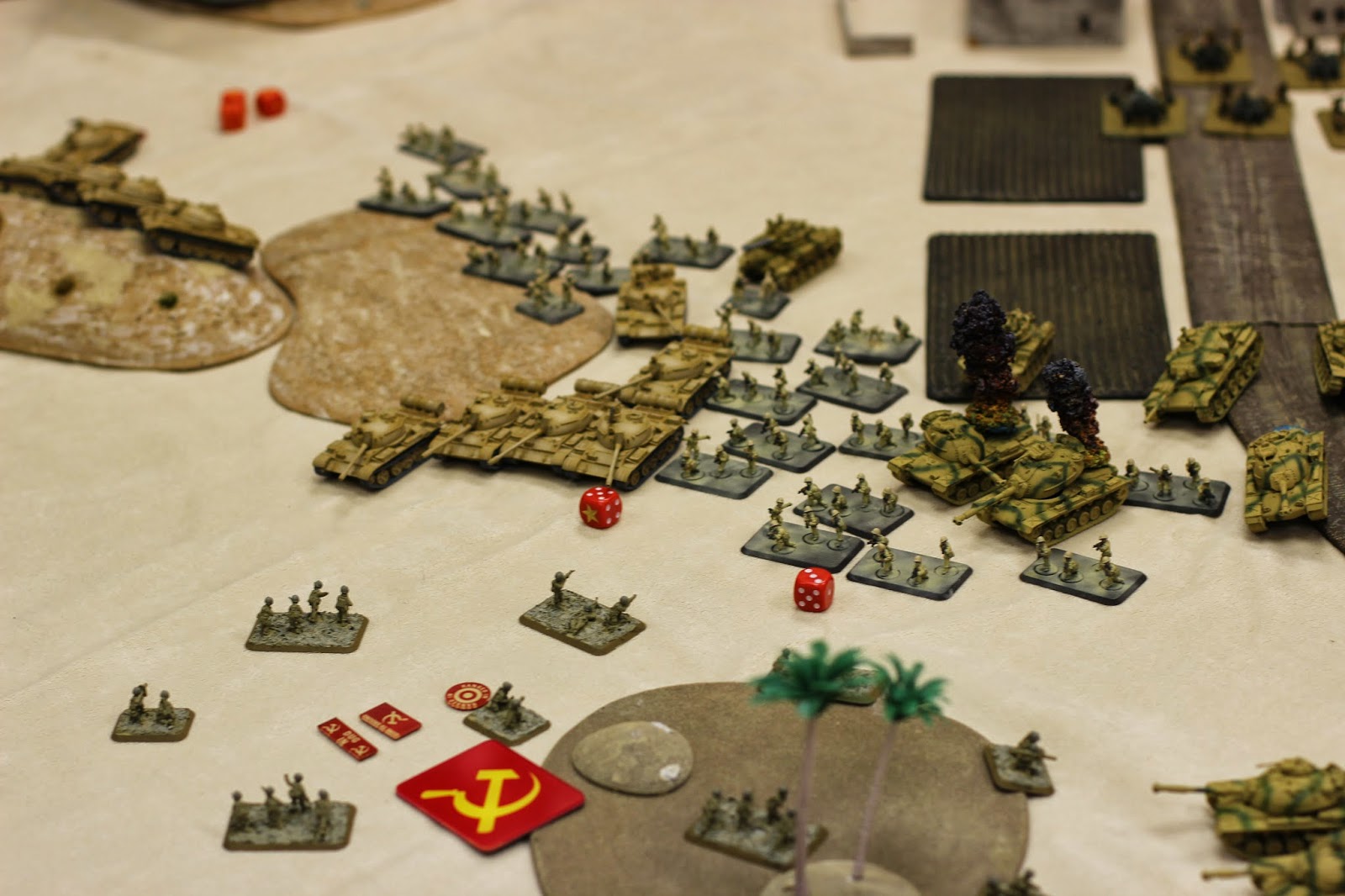 Pushed out of their fox holes what is left of our platoon will try to dig in next turn. 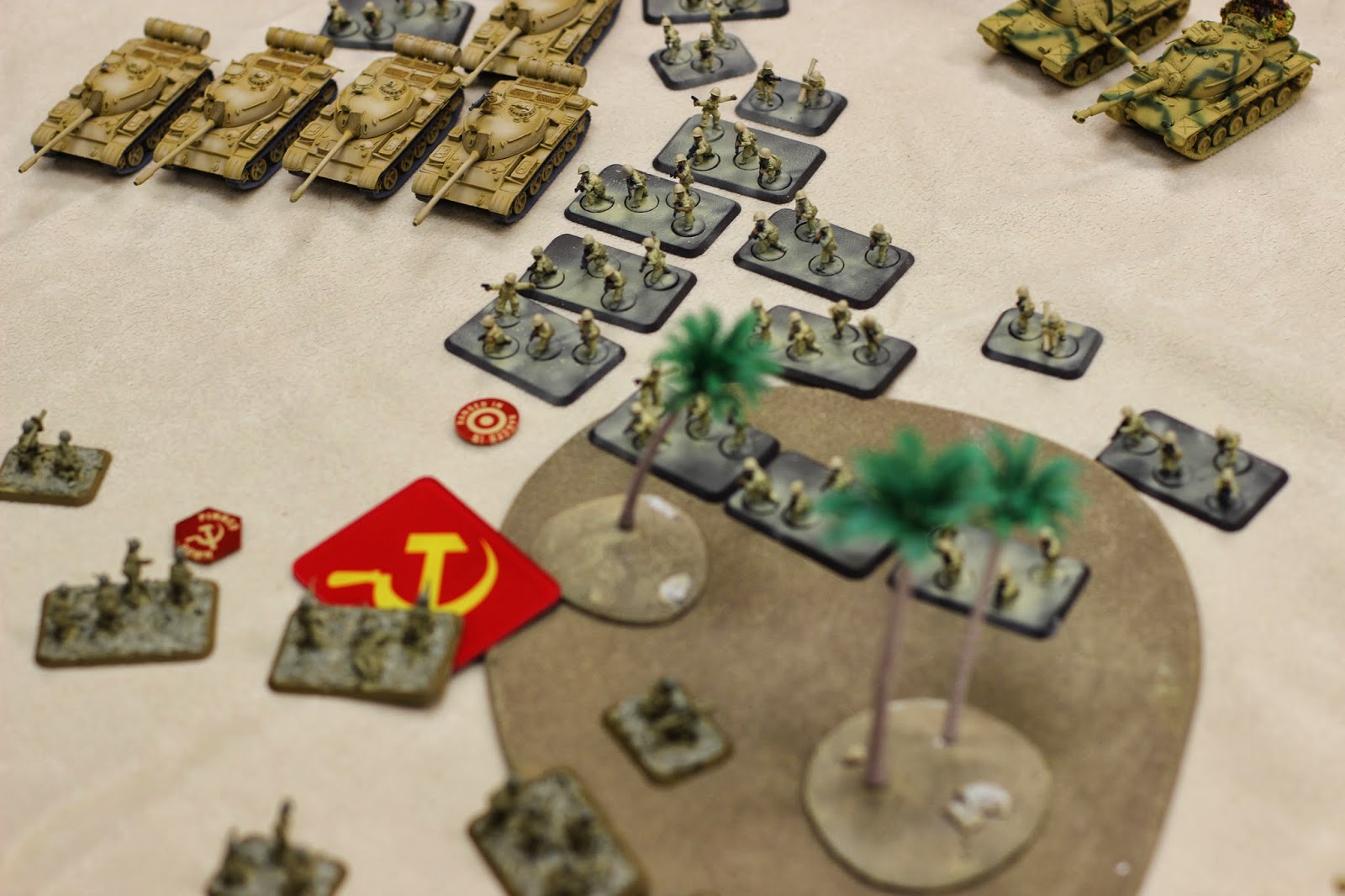 Placement after a bloody pounding from tanks, infantry and artillery fire. This was followed by an assault from the infantry. We are pushed out of your fox holes, pinned and reduced. (didn't I just tell you this earlier?) 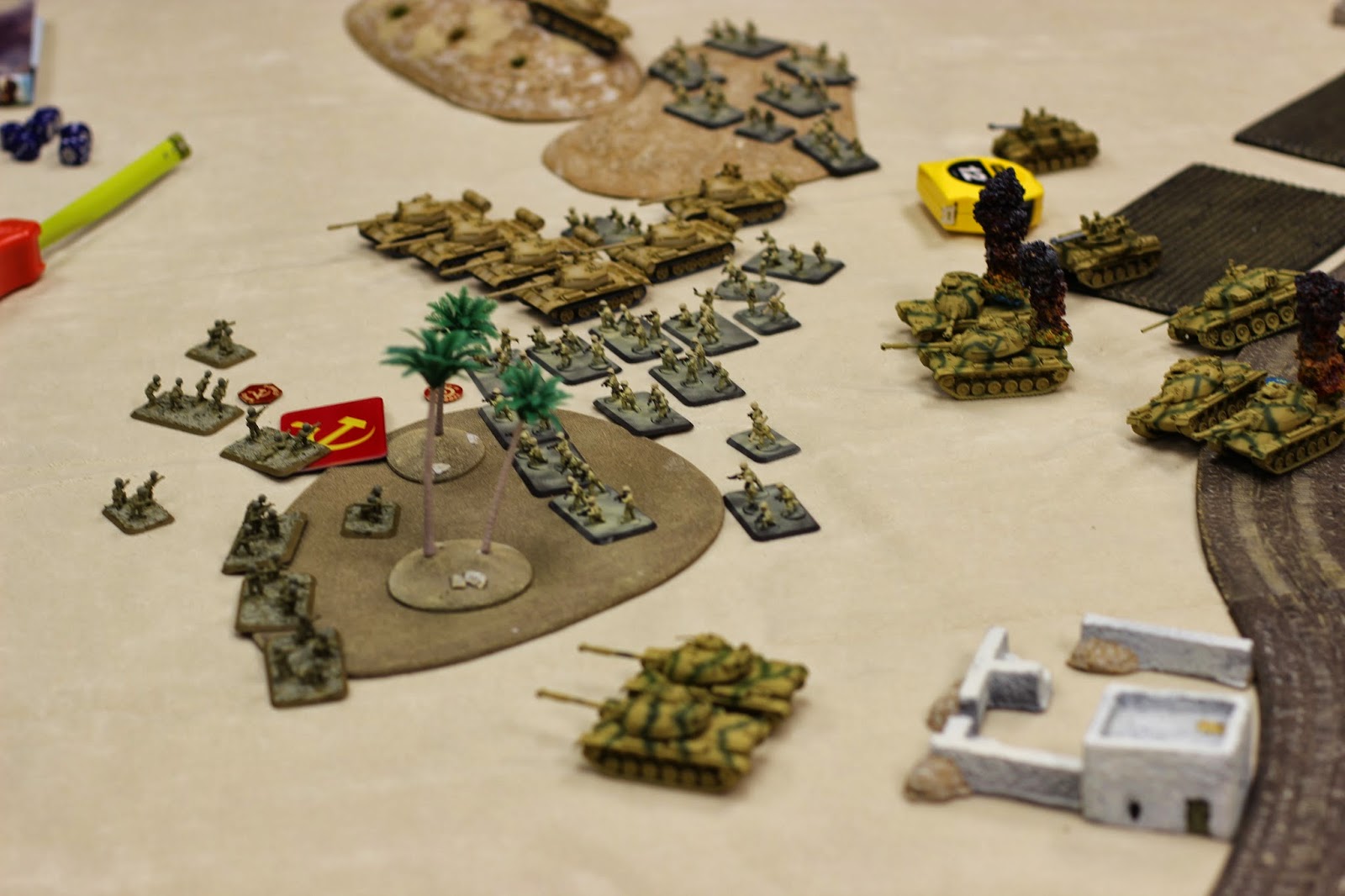 Our turn to get some pay back, an attempt by our air to bomb the front lines. (note: another mistake was we forgot to roll for firepower after planes were hit) Mark shoots from our left with the Magach 3 platoon. Followed by my shooting from my reserves from our right. 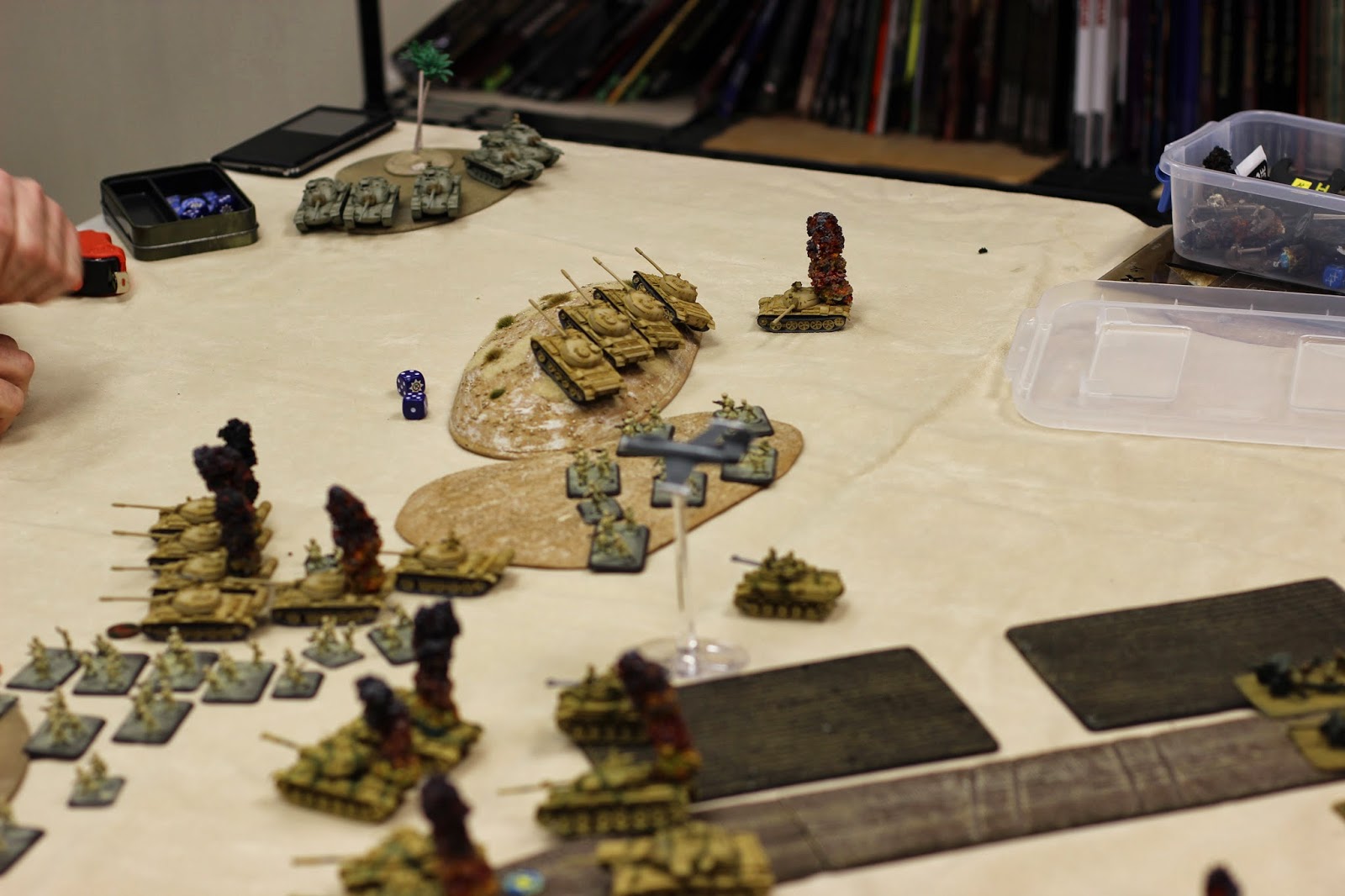 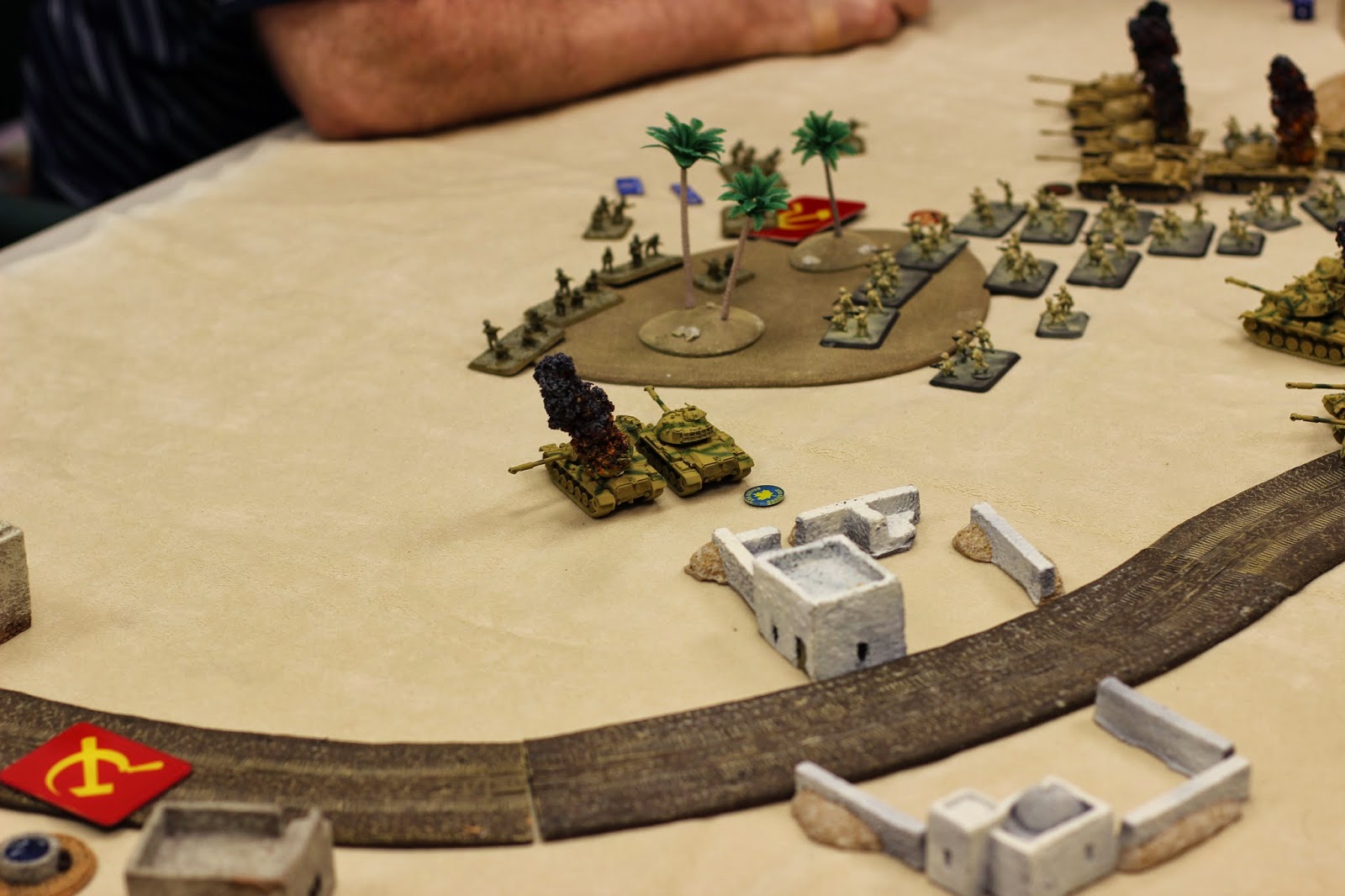 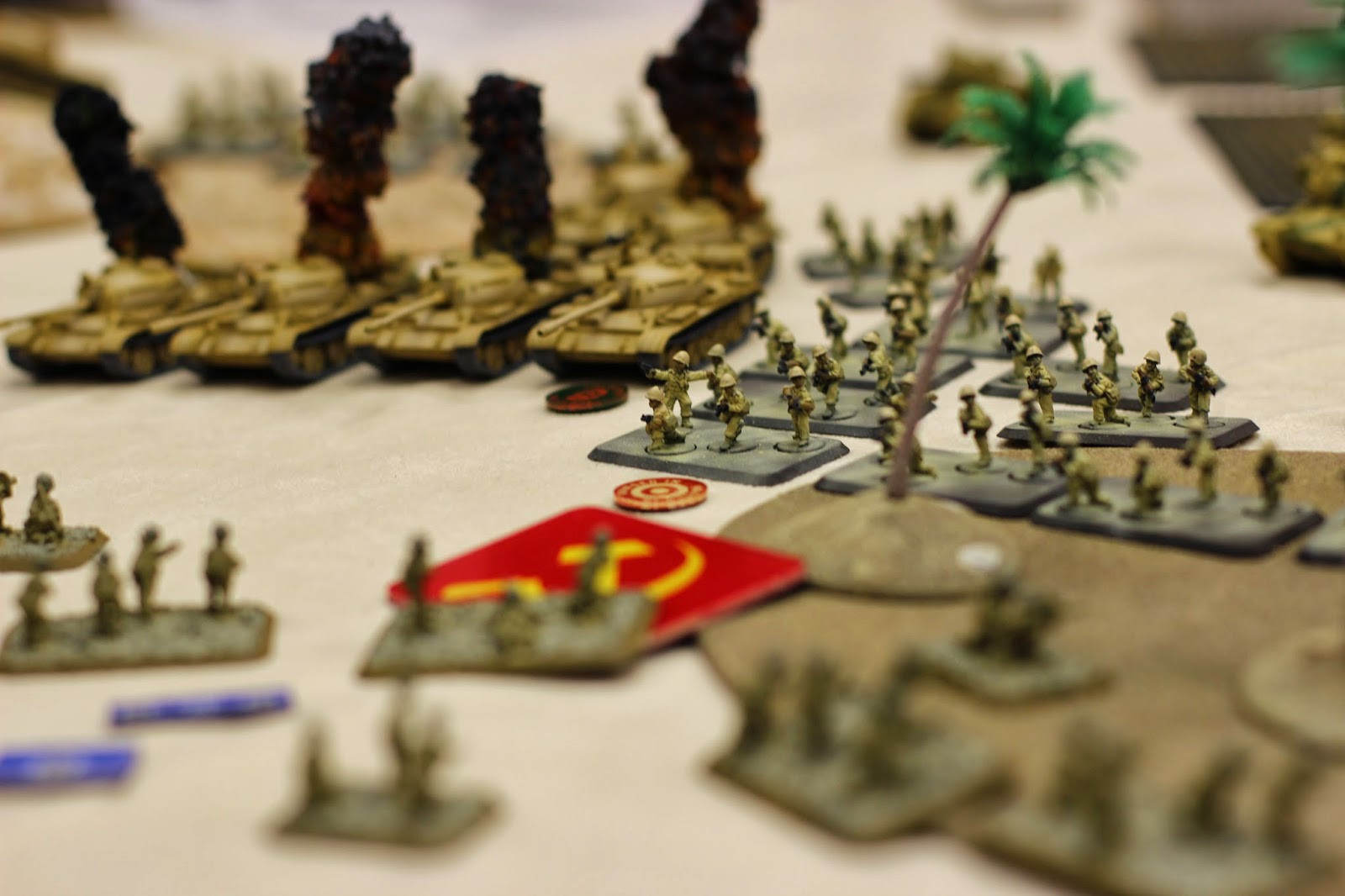 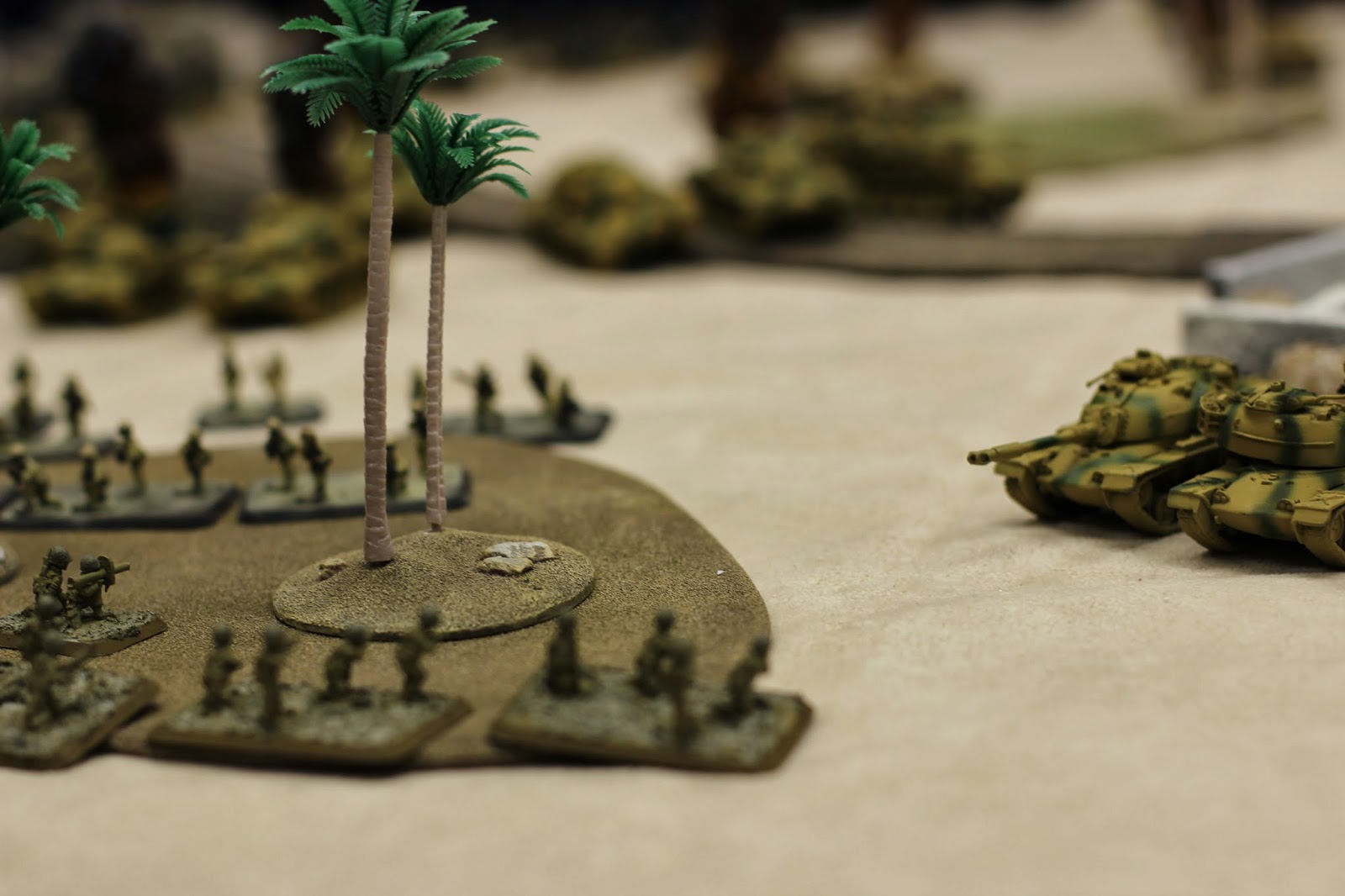 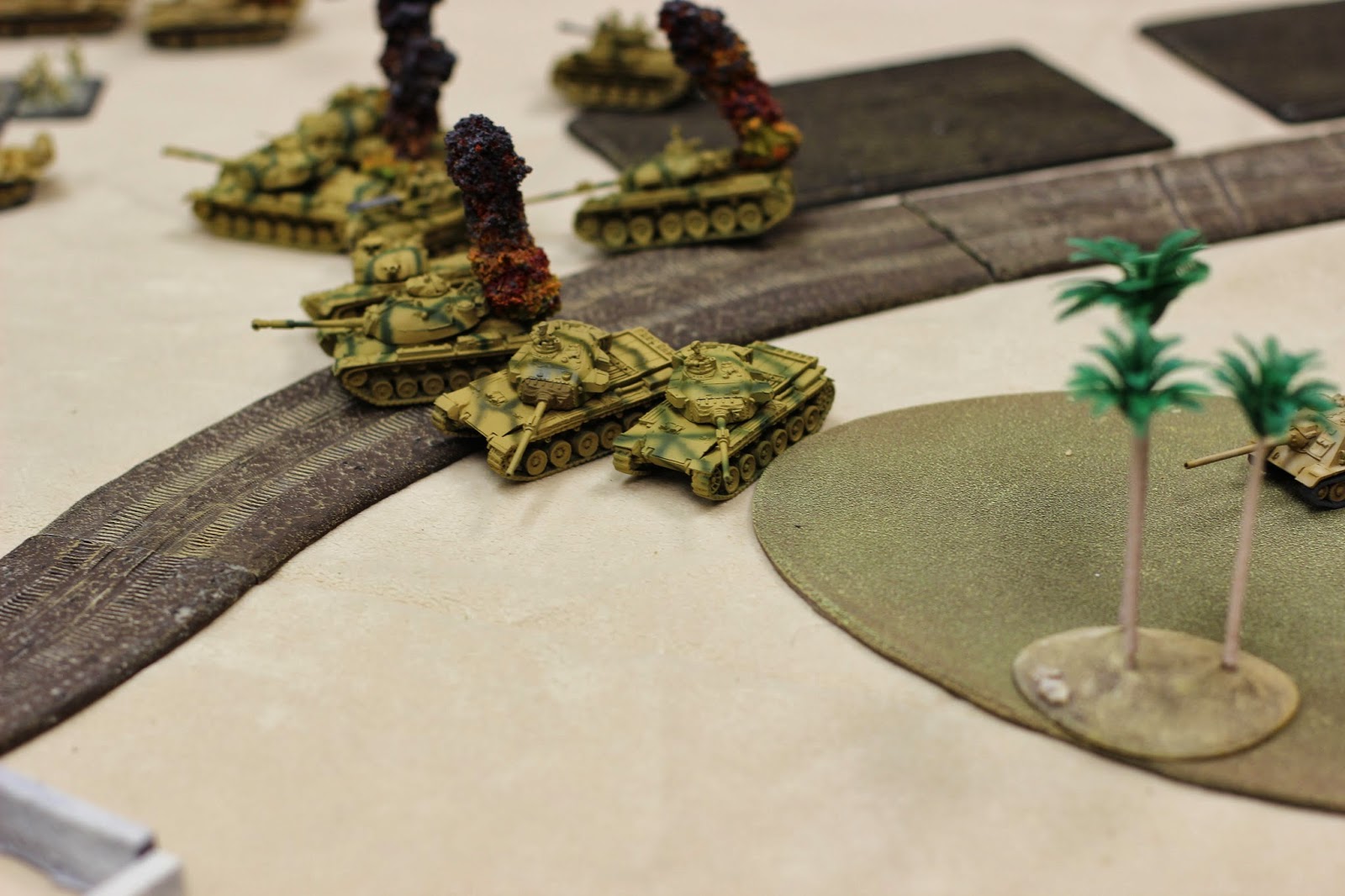 I moved up on this one enemy tank that was trying to take the well (objective), well game doesn't start to end till turn 6 silly Arabs. Three shots and I fail my dice rolls. 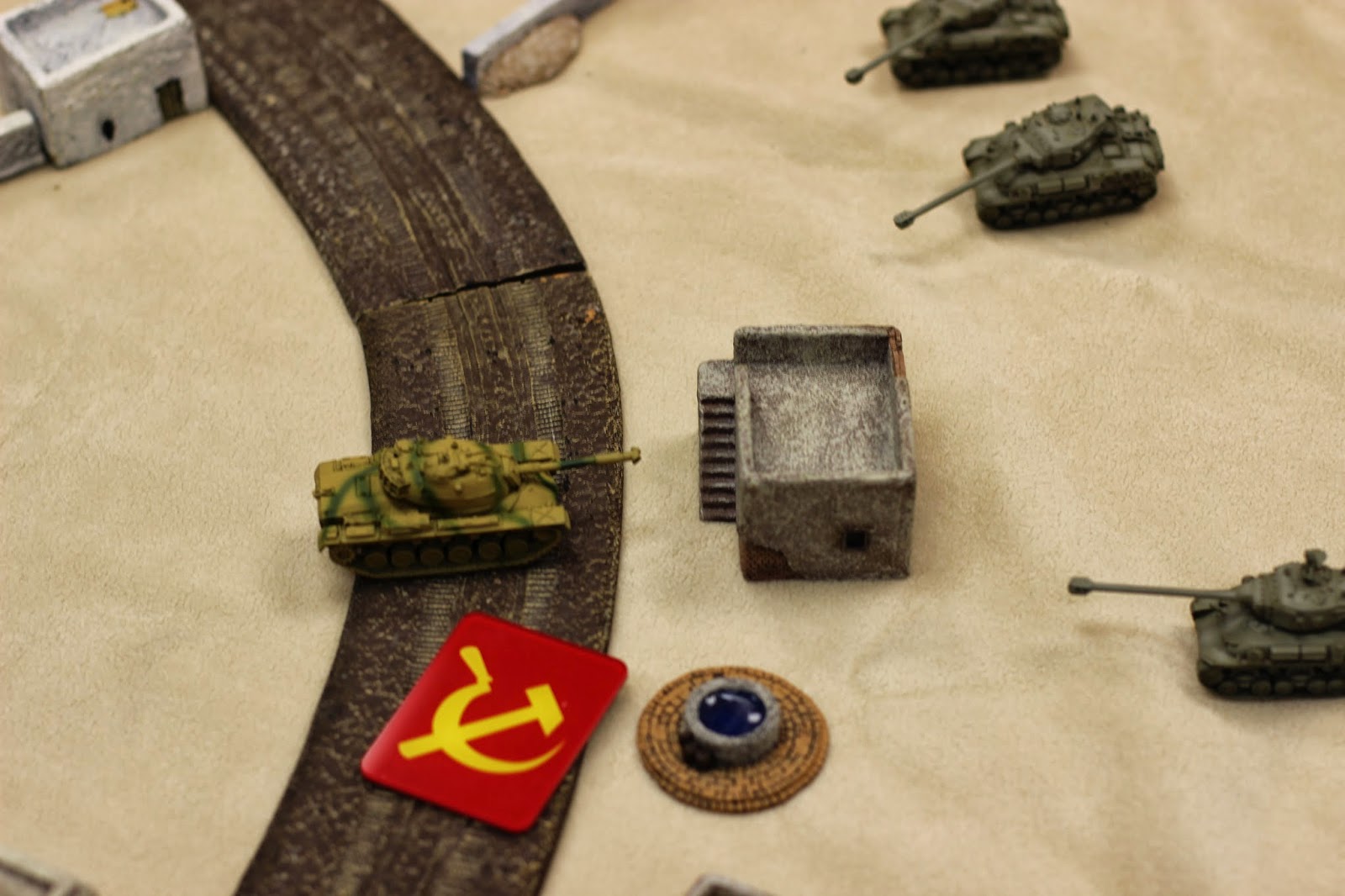 
I move to get better shots off but fail to score any hits. 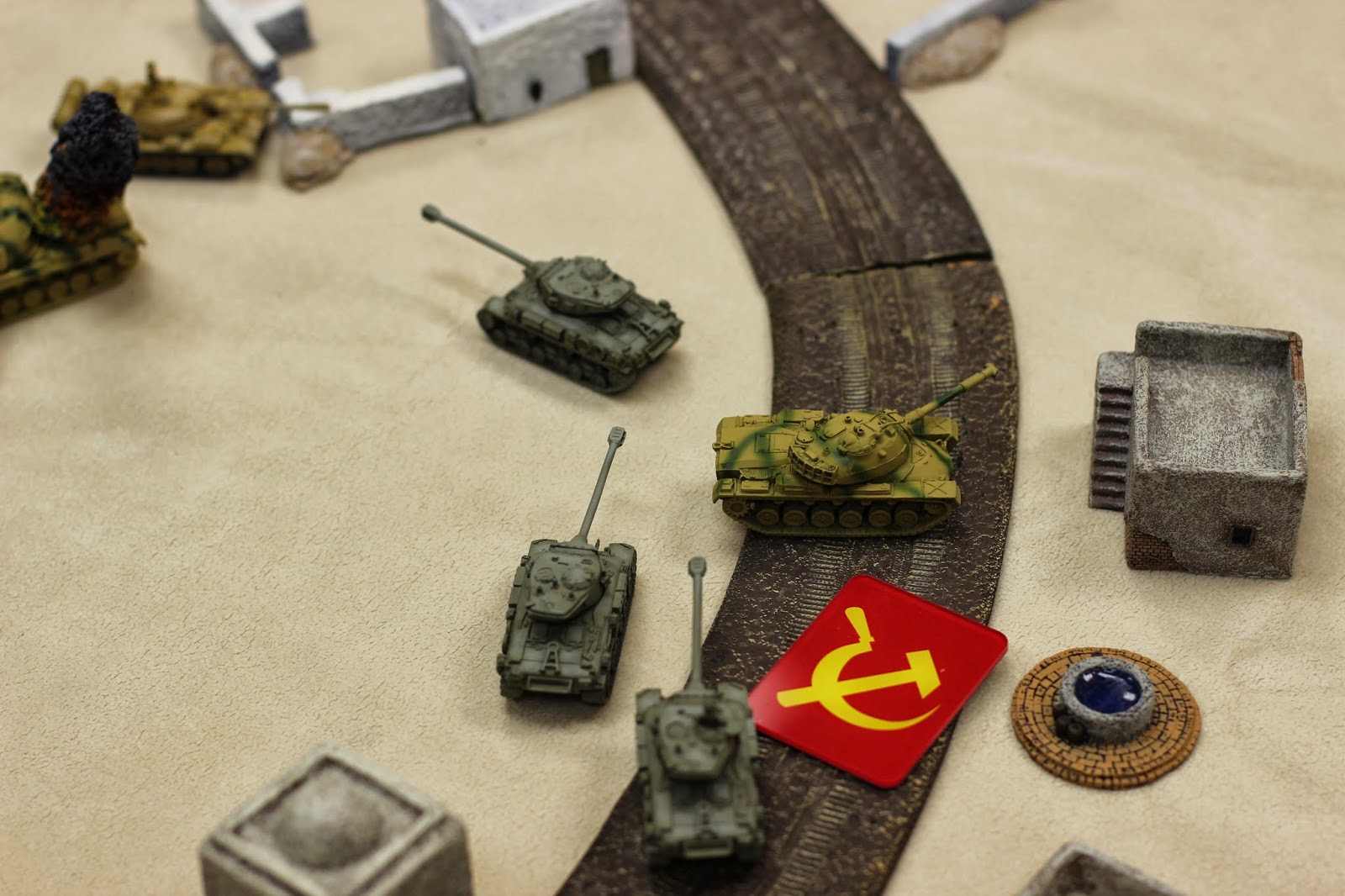 My other tanks start shooting at the enemy, followed by my mobile artillery who moved at the double to get in the action. 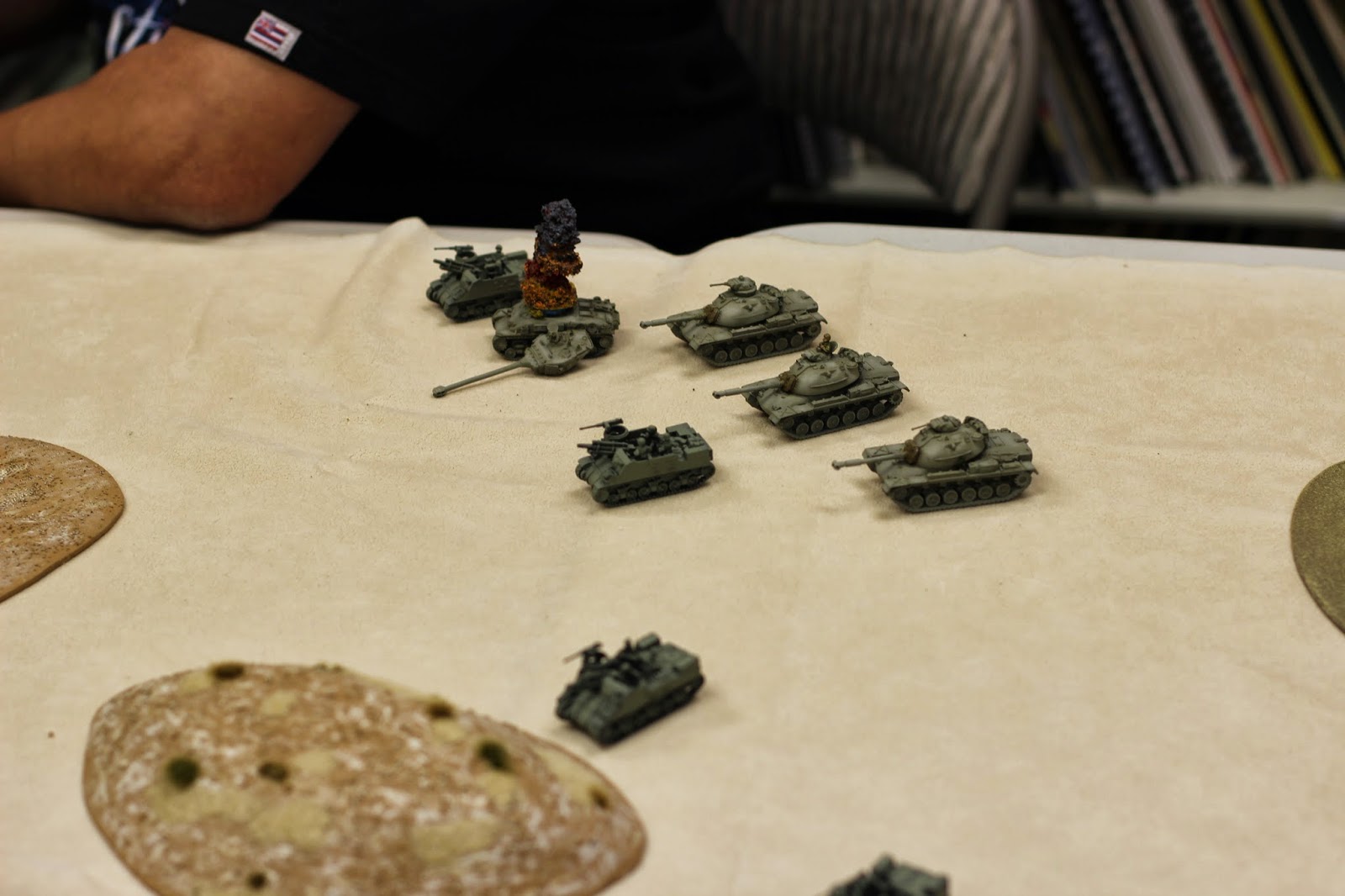 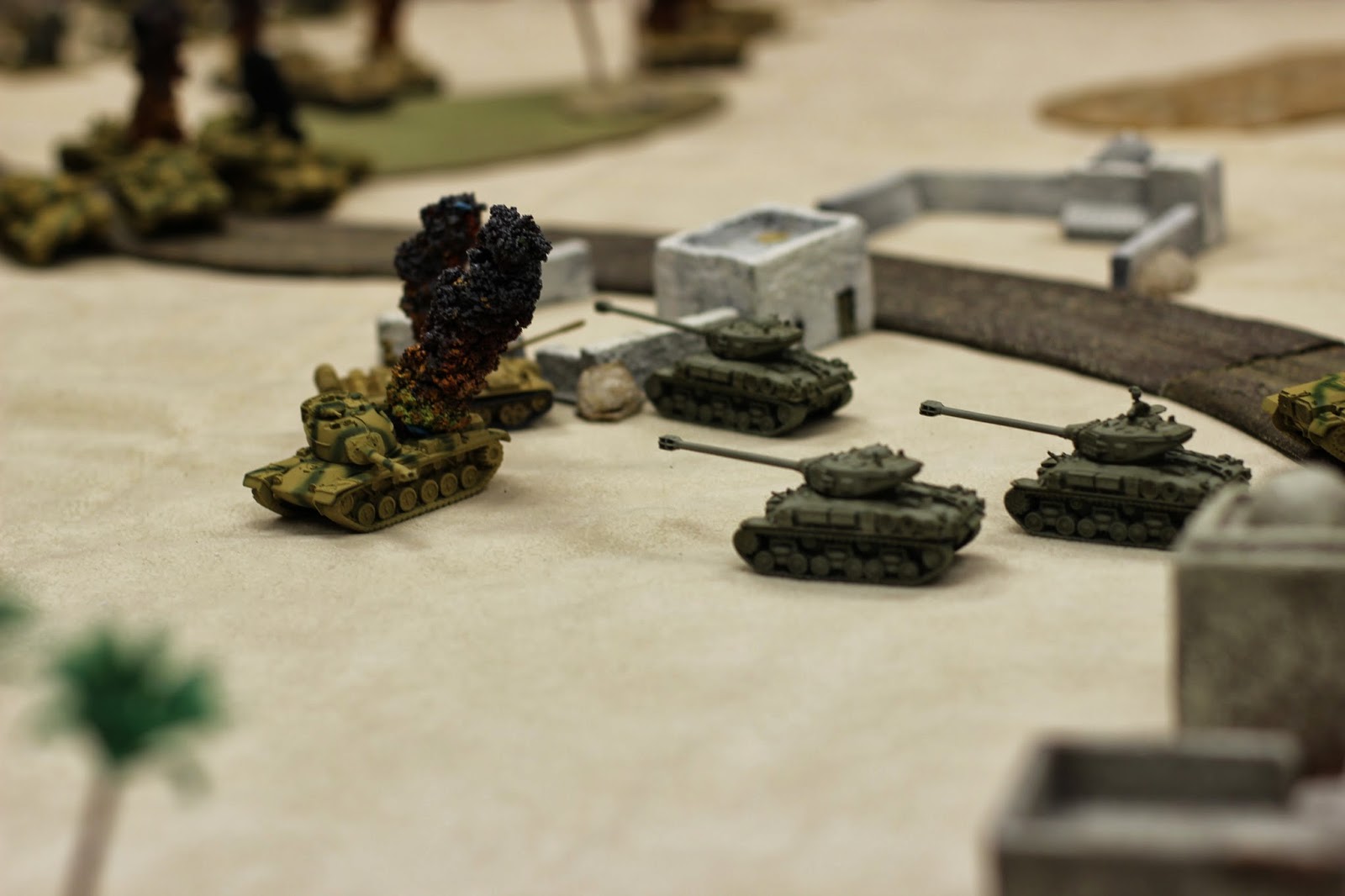 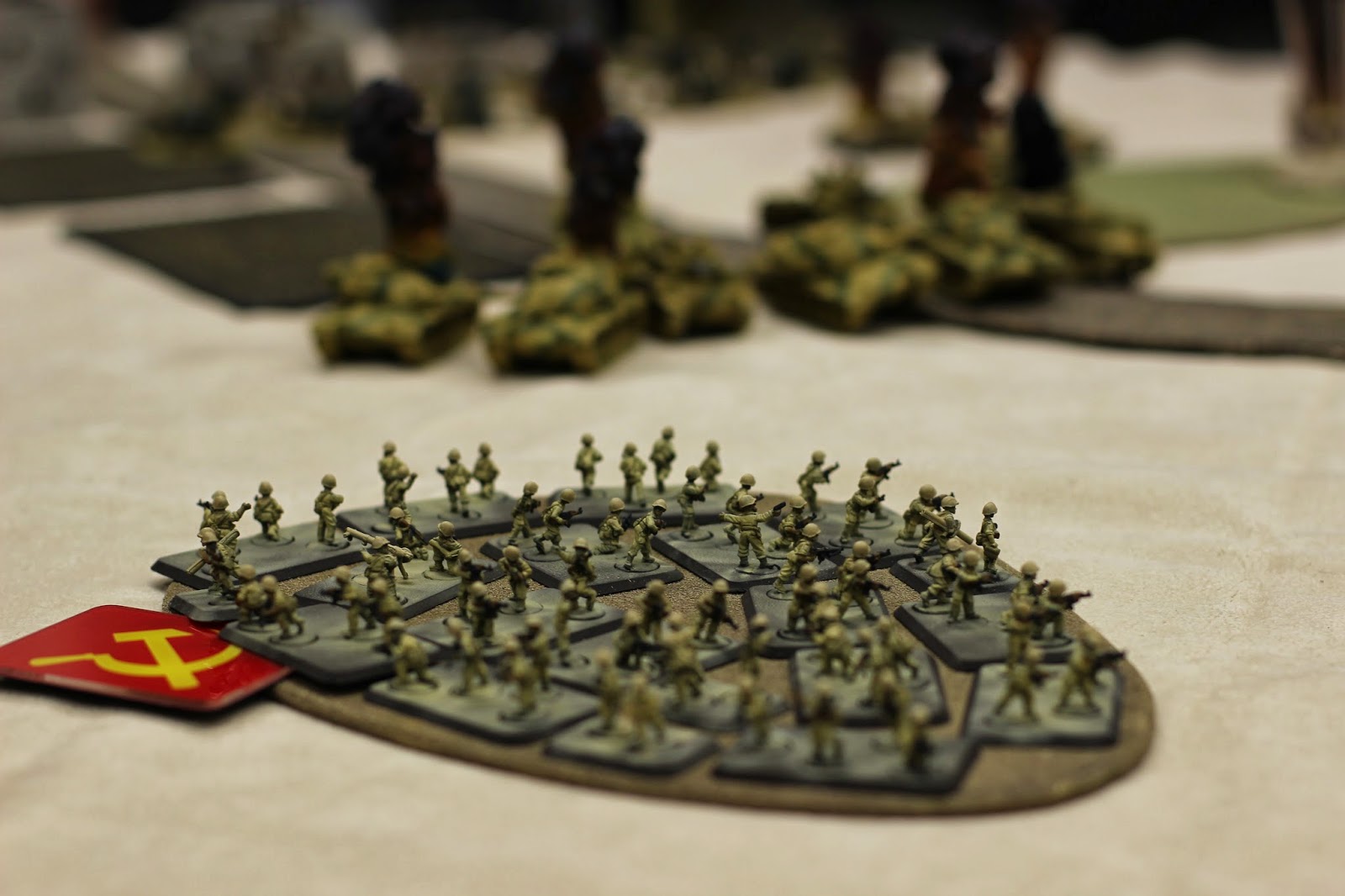 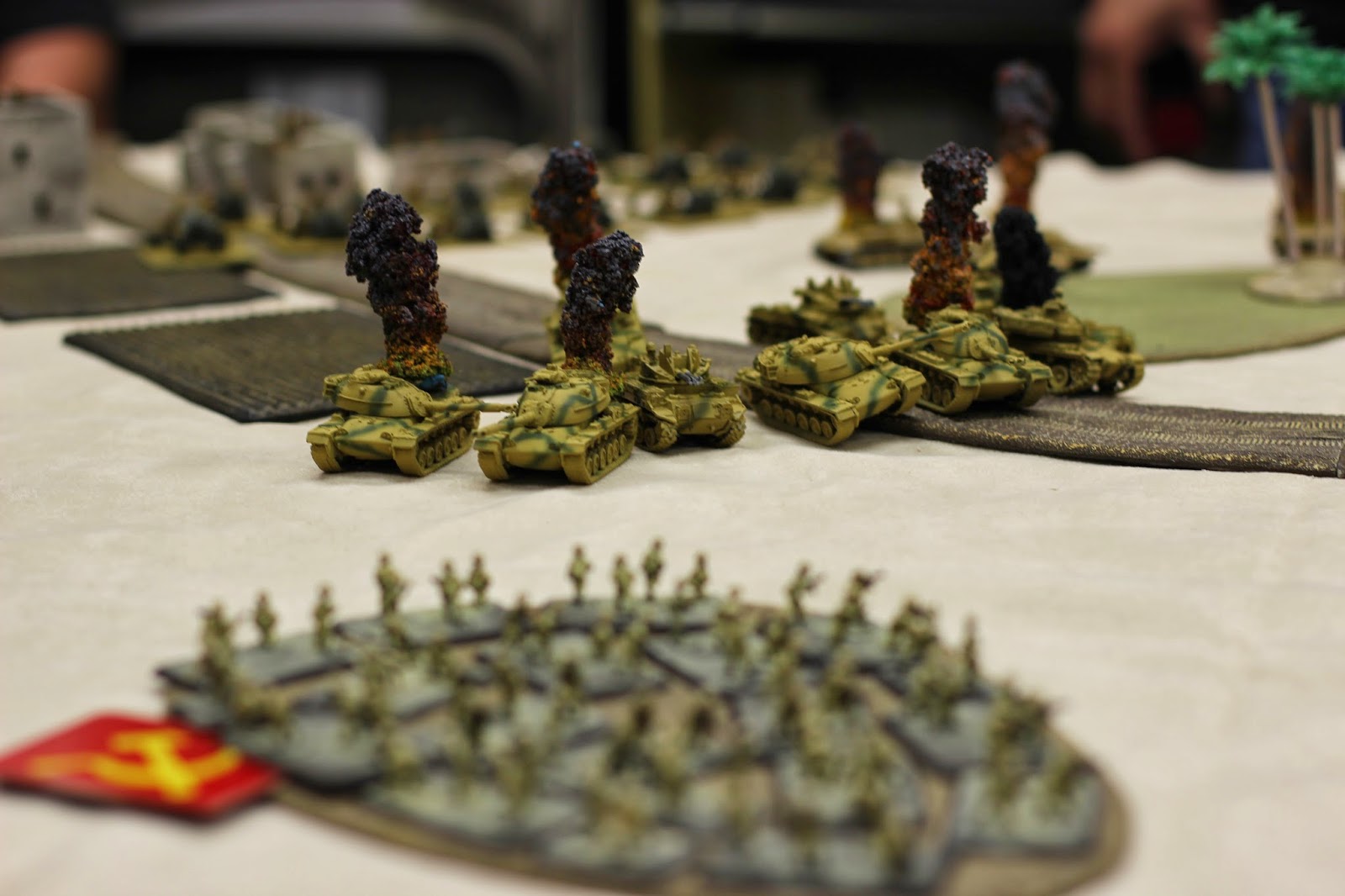 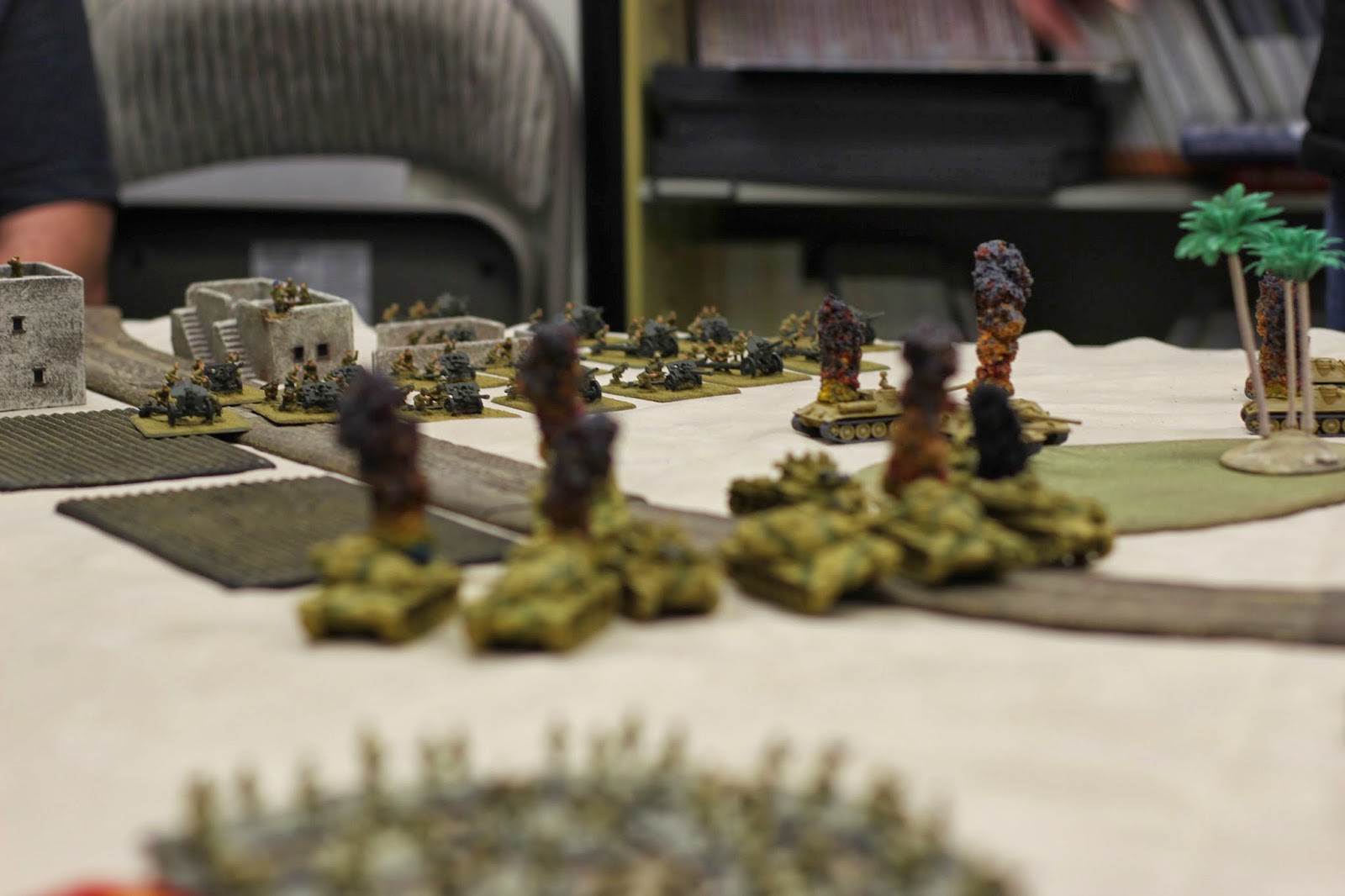 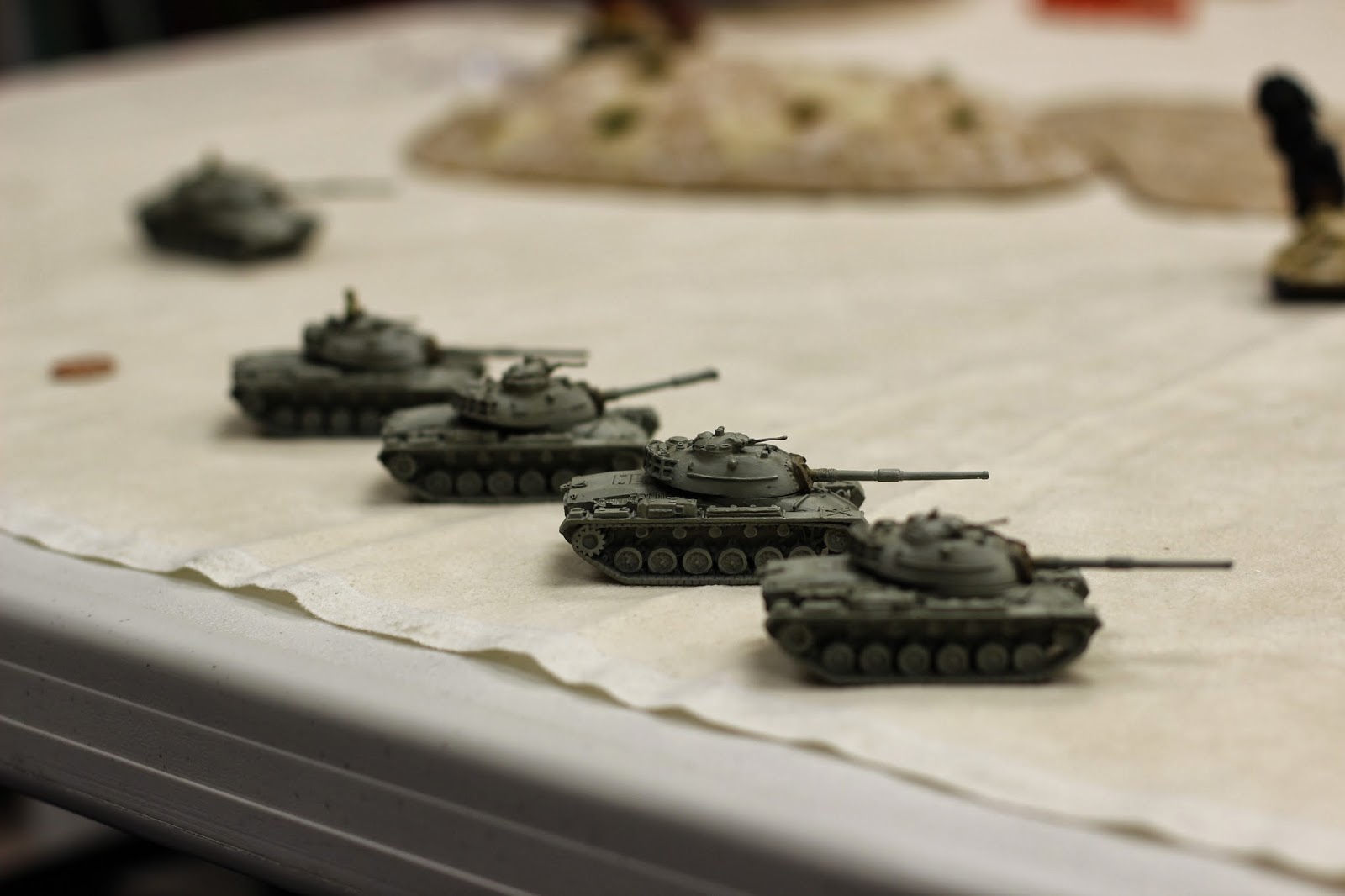 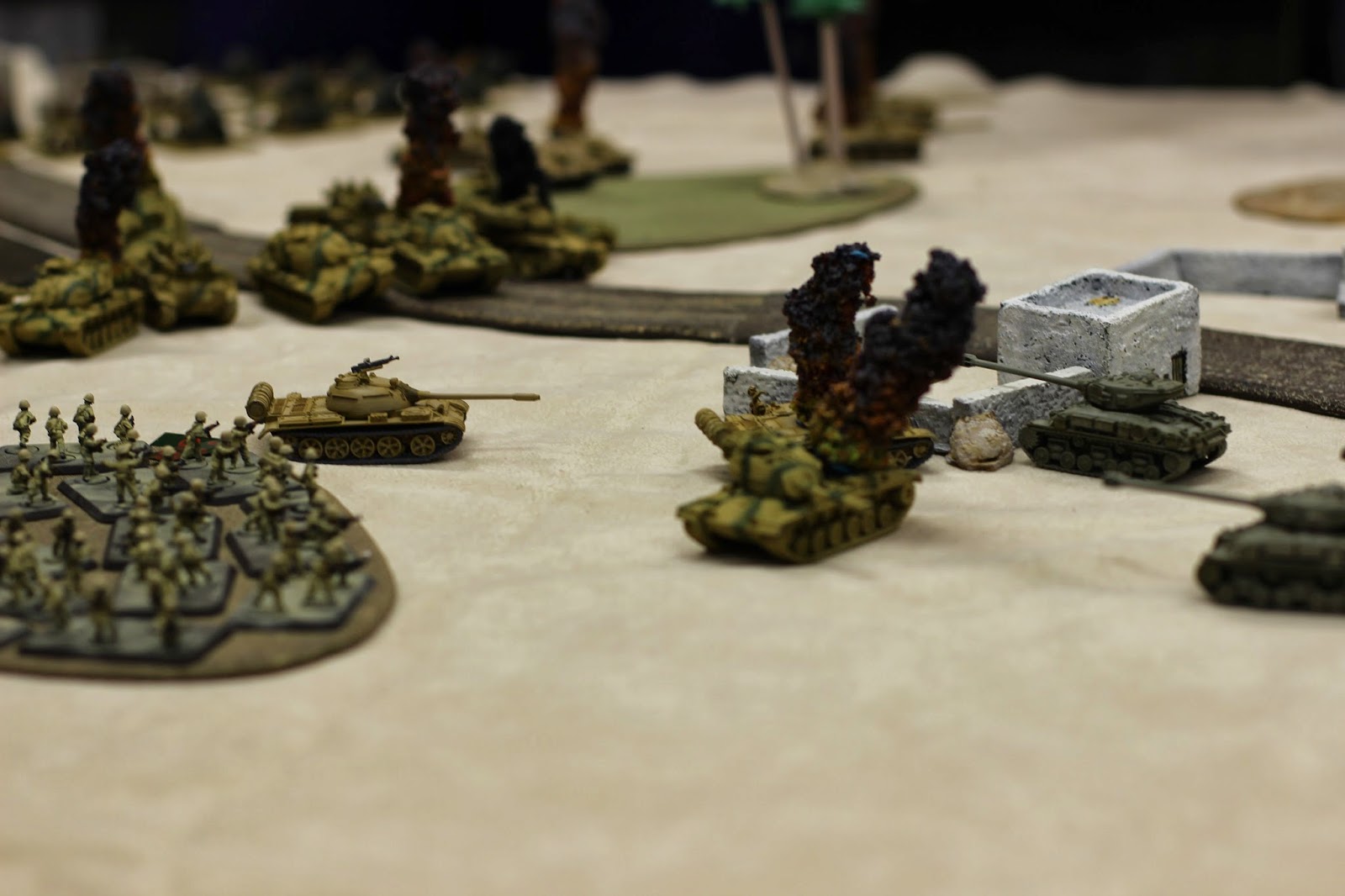 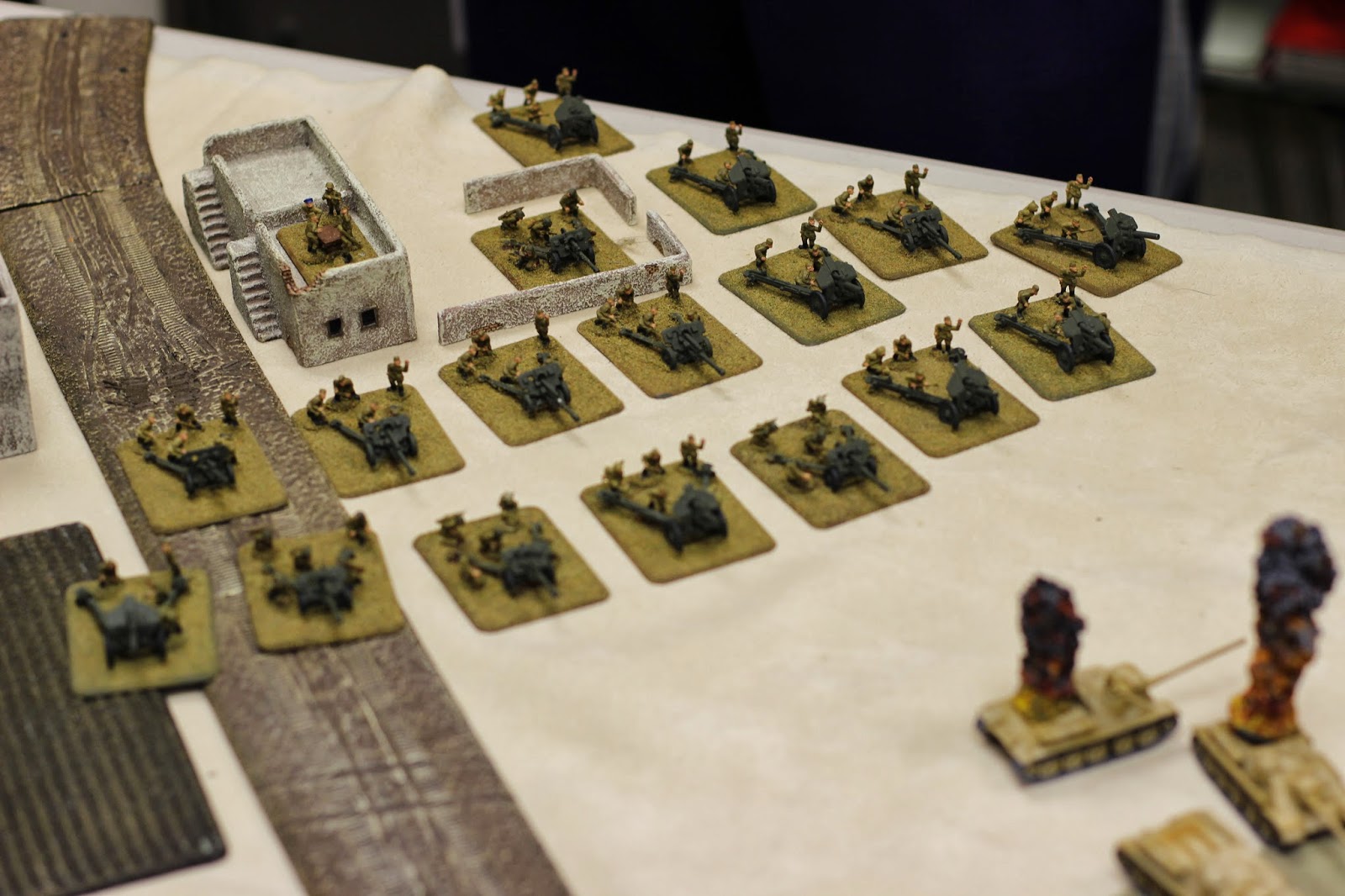 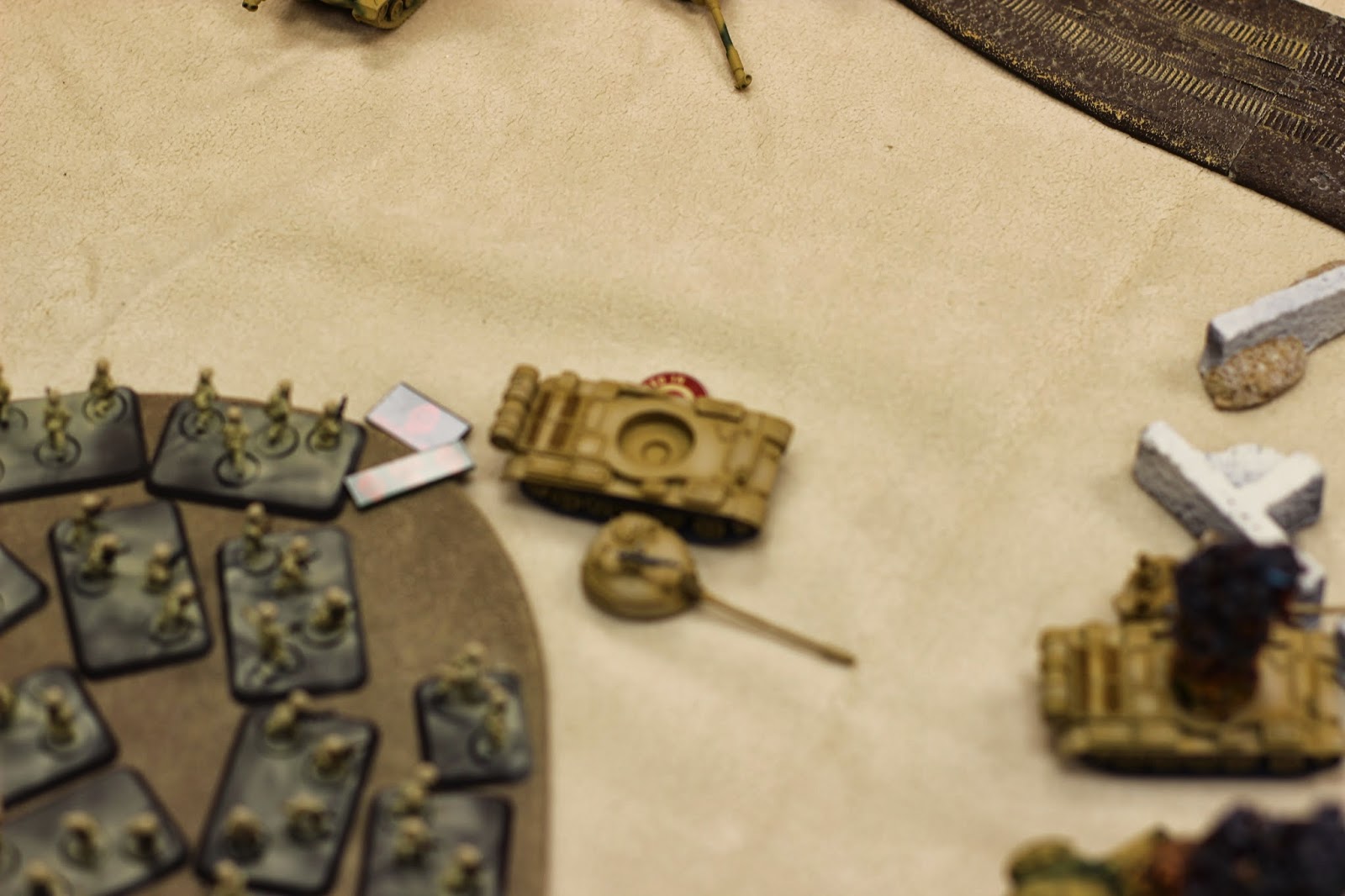 A very fun game had by all. Great company and some good times! Though I am slowly building up my own force of Egyptians I have realized how tough it can be for the Egyptians army. I think they were handy caped by teaming up with the Jordanians.

Happy gaming and do share what you play also!

Posted by Miniature Player at 5:12 PM